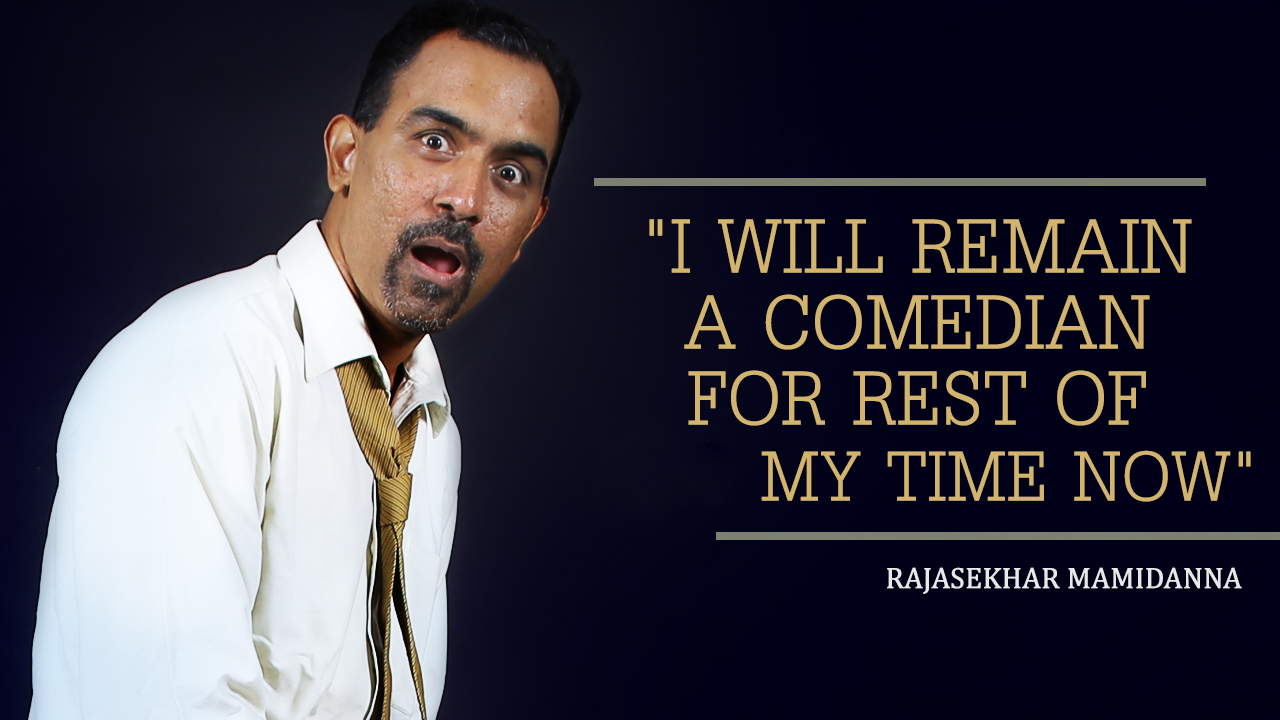 It was in July this year, that after a long period of dilly-dallying, I finally saw myself walking into a stand-up comedy show held in the city’s hip and happening cafe by name Cafe Mocha. After a tired day at work, all I was looking for was a couple of hours of willful unwinding. Yes, I’d hear many a good thing, about the stand-up comedy scene in the city, all the time, but then never had I had the first-hand experience of it. However, it didn’t take much time for me to realize just how funny and humorous the whole scenario was. Comedians of all ages and styles, came about, dabbling topics from chicken biryani to inter galactic space travel. Wonderful talents erupted on stage, one after the other. However, there was one man, who spoke, wielding confidence and razor sharp wit, who instantly connected to everyone in the place. The man, of course, I got to know later was Rajasekhar Mamidanna.

That was the time when Rajasekhar was plummeting through the city circuit, with weekly performances and college events. Within months, I saw him make a brand of himself, and create a remarkable alcove for all things smart, and witty. His journey before Hyderabad had been laded with impressive tales, marked with appearances on NDTV Rising Stars Of Comedy and TEDX Talks ( videos below ) to being perhaps the Funniest Man in the City presently. We approached him for a few anecdotes, and he was generous enough to take out time from his busy schedule to talk to us. So here’s presenting Rajasekhar ( naam toh suna hoga ) :

First things first : What’s in a name? Literally : Where does Rajasekhar the techie become Rajasekhar the comedian?
I have been a mimicry artist during my engineering days. So, stage fear was never an issue. Eventually, when I went to Bangalore to do my MBA, I heard about a public speaking Forum called Toastmasters. I became part of it. There I started honing my skills as a public speaker. I took part in a lot of competitions, winning a few of them along the way. Of course, this experience gave me a lot of confidence. In time, I found out about stand-up comedy as well. However, I understood that stand-up comedy was a starkly different from Mimicry. This was my prompt, as I found that as a challenge and started working at it.
In 2012, I met Nitin Gupta ( AKA Rivaldo in comedy circuits ) and it changed a lot of things for me. Suffice it to say, I will remain a comedian for rest of my time now.

The Sorting Hat – If you were to choose 3 more pursuits apart from presently being a comic, what would they be? and why?
Teacher : I like motivating
Social sector : I have an inclination towards reaching out to people
Writer : I’m a lazy writer. But still, would love to pursue writing.

Many at times we look at comedians going for a particular theme/genres in their acts? Do you look for any such specifications? What would be the topics or genres according to you, which are bound to leave the audience in splits? Minimum guarantee that is.
I think Self-deprecating humor works most of the times. The only rule I have while performing is that – I don’t want to do below the belt kind of humor. Apart from that one specificity, any genre or type is fine by me, as long as the observations I’m making are relatable and acceptable.
Also, I will always try and make a point through my jokes. Try.

How important is it for a comedian to actually know his limitations, given the fact that humor like common sense is highly subjective? How do you manage to connect to a pan-Indian audience.?
Knowing your limitations helps. I have my limitations. They may cease to be my limitations in the future, but right now they are. So I will keep playing according to my strengths. That’s the key thing, you know. Even my strengths keep changing with time. But that’s how it is. I believe to be always on my toes.
As long as observations I make are relatable, it doesn’t matter where I’m from, I guess. That’s what clicks..no? Journey Of Funny Side Up ( One Of City’s well-known Comedy shops ) : To the uninitiated could you guide us through the journey of Funny Side Up. The Crew installed, the ideologies behind it and your role in defining it?
Funny side up just happened to be a name which we gave to our group. Initially, we were five of us, when we started the group. Rohit Swain, Saikiran, Umesh Somani, Avinash Agarwal and I. We did a lot of theme based shows together(Like North Vs south, IT returns, It’s complicated and so forth). In doing these shows, we were able to attract an audience of around 130 to 150 per show at the State Gallery of Fine Arts Auditorium. This gave us a lot of confidence, as a group, and more so individually. Before long, the performances started shaping up our comic styles and in a way, our future as well.
So, it’s just a name, and anyone and everyone who is interested in doing comedy is part of Funny Side up 🙂

Inspirations : Who is that one person ( Indian or Otherwise) that always manages to leave you in splits. Also, could you tell us about any one incident where you thought the audience couldn’t get your joke?
Nitin Gupta is someone I look up to. Over the years, I’ve learned a lot from Nitin Gupta and Vipul Goyal. Both these continue to inspire me. Internationally, I started liking the genre of comedy because of Jim Carrey and later on got a liking for George Carlin and others.
There are a lot of occasions where the audience doesn’t get my jokes 😛 . If they get it, you pause and enjoy the response or else just continue as if that’s not even a joke. All Izz Well. When you want to go and present your act , what are the first five things that you want to be decided upon? Also now that you are into mentoring comedians as well, how has that experience changed you?
Topic, Observations related to that topic, Test that content with fellow comics and friends, Remember the content and Deliver.
Mentoring is a big word. I would say, I am just putting my perspective in an acceptable way so that we could discuss further. It helps a lot because every comic has a different style. So you always learn from others. You understand their thought process. That’s how you never judge others. That’s a good space to be in. Now to do some fun :
A. What is that one movie role that both the techie geek as well as the comedian in you would love to play?
Villain
B. If you were to perform in war-torn countries like Sudan, Libya, and Iran..What would be your opening line there at?
Hi. I am from India. I didn’t come here to Bomb.
C. Now since Comedians are basically geniuses here’s a task : Could you come up with a joke involving these 3 words – Puberty, Netflix, and Elephant?
When I hit puberty, I knew nothing about both Netflix and Elephant.

Now that you’ve established yourself as a Star Comedian, how well do you think India as a reserved and shy audience will open up in years to come.
It’s a huge journey both for comedians and Audience. We will also mature and the audience will mature over a period of time as well. Till then I guess we have to do our best to push the scene forward.
Stand up comedy is not a money making profession. That statement was also kind of stereotyped a few years ago. Now we know it is not. So everything changes.

Any advice that you would like to give to the budding artists that want to make it big in this preferred arena? Also, can we expect you to showcase in any other cities here or abroad soon enough? How’s the itinerary looking like?
Stage time is the most important I feel. One has to keep performing irrespective of the result. That’s how you feel at home, and the fun starts. When you enjoy yourself, you make people happy all the time. At present, we are looking at events in Mumbai, Chennai, Delhi and Bangalore on a regular basis. Let’s see where our talents take us to.

So, Ladies and Gentlemen, that was Rajasekhar, talking to us about all things funny. Take my word for it. Never miss his shows, as unlike many others, his sets are always original and made to the audience. You may follow him here,