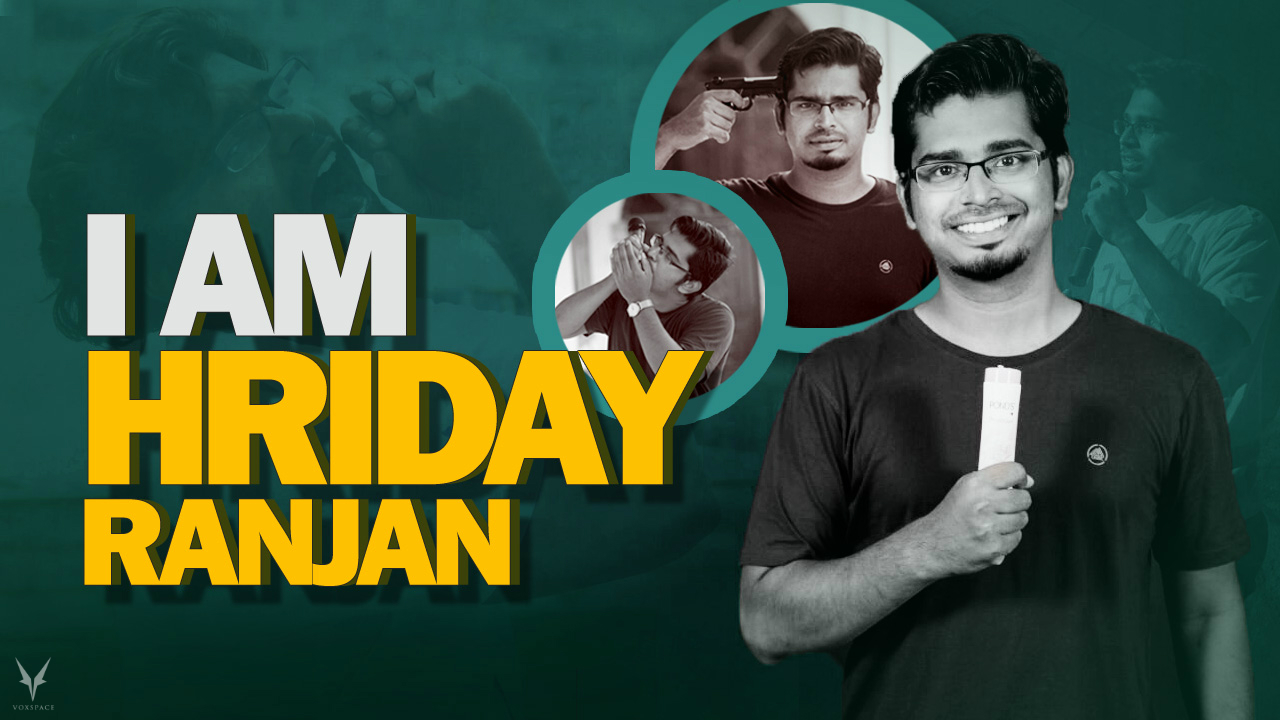 To be or not to be. This Shakespearean verse has captured the imagination of writers, thinkers, and psychologists over the years, toying with an idea of what needs to be done. And there are very few people who ponder upon such thought at a mid-point in their life and take a decision which defines them forever. Over time, I’ve personally met only a handful of people, who’ve given their passion the proper shape and space to go beyond their bindings and make a mark. One such person is my dear friend and Hyderabad’s dopiest comic, Hriday Ranjan. He and I go way back ( owing to our journeys to a common organizational start point ), and yet not until this point, have I conversed with him in such detail, so as to know him at a personal level. The more I discover his thoughts, the more I understand his quicksilver wit. So Ladies and Gentlemen, let’s hear it for Hriday Ranjan,

To start off things, where does the journey of Hriday Ranjan start? Were you always interested in StandUp comedy or was it a taste acquired over years?
The first time I actually noticed standup was in 2006 – Raju Srivastav in The Great Indian Laughter Challenge. He stood out from the rest, and I remember performing his sets for friends later. Even today, I could perform a 30-minute show on Raju’s content. Then seven years later, I participated in a standup hunt and won it. That’s how my journey began.

Coming to Hyderabad’s Stand Up comedy scene, how do you see the journey shape up over years, and in comparison with say Bangalore-based comedy circuit? Being one of the very first Stand Up comics from the city, how has the changed now?
The scope for stand-up comedy in Hyderabad is slowly but surely changing. Bangalore happens to have an urban, young audience who have a culture of stepping out in the evening for a drink, so the scene there is much more advanced. If Hyderabadis can think beyond beer and biriyani, the scene could improve vastly. But we now have our own comedy club in Hyderabad, so we’re all hopeful for a drastic change in the coming months.

When one sees you on stage there is a certain peacefulness about you? As opposed to someone like Rajasekhar or Karthik Kumar, who are electric on the wire, you seem to take a mellowed down approach more often. Any particular reason for it? How do you pace your act then?
Must be all the pot I smoke!!
Honestly, both Rajashekar and Karthik Kumar are seasoned performers and have honed their own, unique style of comedy. I don’t try to be mellow on purpose, but it just happens sometimes. I think it takes 5-6 years to discover your own voice and style of comedy, and I’m still working on that.

You’ve been a go-to comedy guy in the city for a while, so then, where do you see yourself say 5 years down the line. And the vision you see for Hyderabadass Comedy. Any collabs you see happening soon.
In five years, I’d like to be an author and stand-up artist. The ultimate dream is to write a book and perform a stand-up special every year. Hyderabadass Comedy Club has been having international and national performers coming down to perform, so the immediate future looks great. I will be performing my special in January next year, and Hyderabadass Comedy Club will have a great role to play in it.

There’s a saying in art circuits which goes ‘Comedy and Art are subjective.Some get it.Some hate it.. ‘. Now, being a comic, how do you ensure a fine balance of comedy. Again, assuming that you care for such balance, or do you believe in fully expressing yourself?
Honestly, I don’t give a damn! I talk about what I think is funny, and my jokes cover religion, politics, and sex; and are peppered with swear words. That’s how I normally speak, so I’m not going out of my way. I haven’t faced any problems with audiences in Hyderabad, except for the one time when I cracked a joke on Allah and a few Muslim guys got offended (Surprise, surprise!) and called me to have a chat!

Now to some funny activities, below are some questions which we hope will challenge the witty comic in you –

What if you were asked to perform in Donald Trump’s casino, what would be your first line to start off the act.
“Thanks for having me here. But with your taste, I doubt that’s a compliment.”

Consider this Hriday, what do you get when you put an elephant in a grinder and a giraffe in a fridge.
“A very pissed off Indian mother!”

What is the first thing you’d do if you woke up as Jimmy Fallon?
Take a break, travel to Netherlands and purchase LSD in bulk quantities.

Three comics are flying over Begumpet in a chopper, what would make you jump out of it.
A million dollars, and Raveena Tandon waiting on the trampoline for me with open arms.

You maintain a highly visited website, showing the angst and flair you have towards societal issues. Do you feel perhaps writing gives you a freedom that stand up comedy doesn’t. Or is there a different reason altogether.
I have been blogging for 10 years now. I am more comfortable blogging because my audience knows me, they’re comfortable with my voice; some of them have been reading my stuff for 8 – 10 years. Unlike stand-up, I don’t have to spend the first few minutes in winning them over, and there’s no pressure of punchlines at the end of every point. Writing is definitely more pressure-free.

Where do you owe your comedy to? What makes a man funny and witty. And more importantly, can anyone learn it, an age old discussion between natural and acquired talent. Having said that, of the comics you know, whom would you term as a natural and can you see someone who has acquired it through years of practice.
I owe my comedy to the absurdity of life in an absurd country as ours.
Talent or the flair for humor is needed, but like all art forms, standup comedy can also be honed. Rajashekar, for example, is an absolute natural. You could wake him up at 2 AM, and he’d perform a one-hour special for you. Saikiran, on the other hand, is sheer hard work. When he began, his hands would shake, he would mutter and stutter. But his preparation and dedication have been meticulous.
Today, both of them are among the finest comics we have in Hyderabad.

What are the five things, which you ensure you have before getting to a show and performing your act?

What are the three things about Hriday Ranjan that not many people know? Given the chance to take up one other pursuit of art, what would that be?

Again some rapid talks here,
Who is the one person whom you despise with all your heart but would love to have sex with?
My immediate ex. She had the ability to drive you nuts, but was also oh-so-hot!

What do you do when a totally hot girl finds you utterly boring?
It hasn’t really happened. They always find me annoying/overbearing/weird/creepy. Utterly boring, not so much!

‘To Be Or Not To Be’ what do you think Shakespeare meant by this?
He meant ‘to be high or not to be high’. And the answer always is, ‘to be high’.

Weirdest PickUp line you’ve used. And did it work?
I don’t usually try pick-up lines. With my looks, no girl is going to come to me at first glance. But I did tell a woman she was very pretty and ran out of there before I could get beaten up.

A place in Hyderabad that you feel you can be yourself.
The university I studied in – University of Hyderabad.

How do you look at writing as a form of expression?
I believe writing and expressing thoughts are intrinsic to human nature. Technology, media, and our consumption habits might change. But at its most basic level – the metamorphosis of a thought into
words – writing will continue to exist as long as humanity exists.
‘Till the last story is told. Till the last song is sung’.

That’s it about Hriday Ranjan. Though we’d love to do the second part to this sometime soon…But yeah, for now, we’re good. Do check him out in the shows near you and if you aren’t following his writings, you, my friend, are losing out on some really great stuff. Follow him here : FaceBook