Meraki Vibes : The New Age Artisan Of Electronic Music In The Country 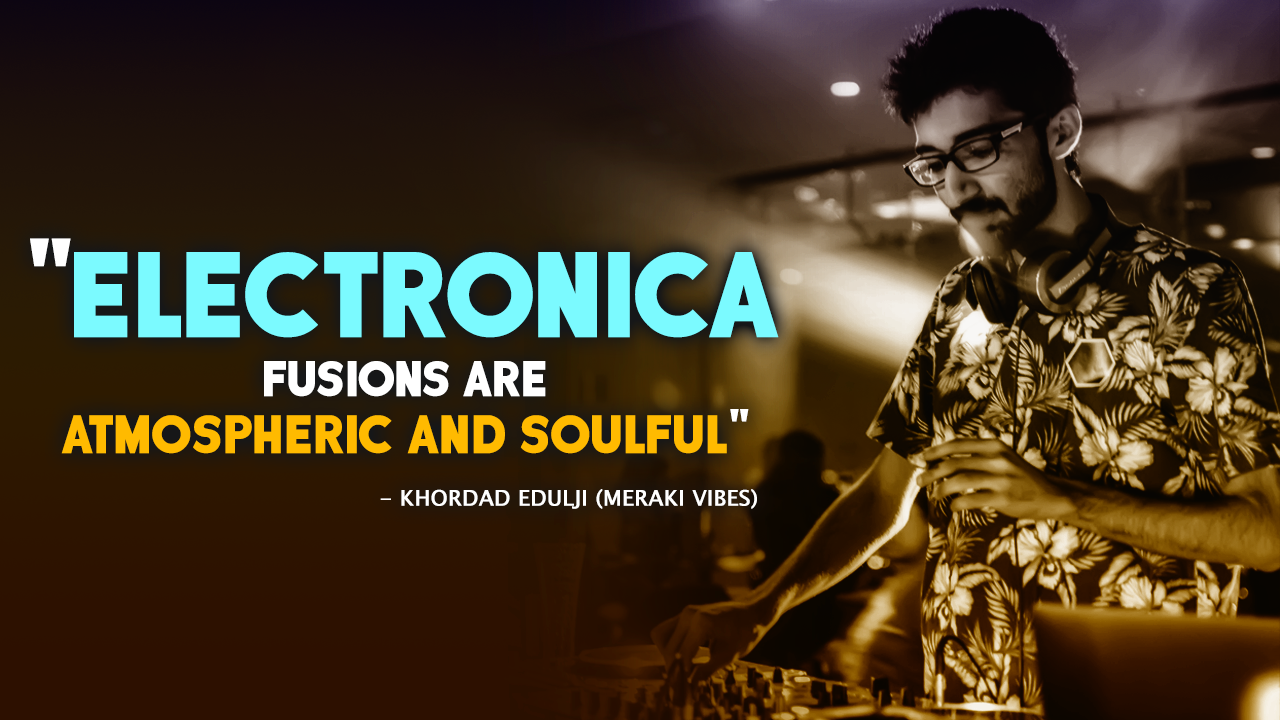 Meraki Vibes is Khordad Edulji’s Electronica infused, House and Techno alias. Based out of Bangalore India, Meraki Vibes’ debut EP was stamped on the infamous Georgian label, Mistique Music. His sounds can be described as atmospheric, soulful and deep with a clear inclination towards non-linear grooves and wholesome melodic composition. Although we find ourselves untaught of the music providence involved here, our interest inched up by second, as we started hearing these tracks. It was not traditional electronic music by any standard, however it was something we clearly wanted to know more about. Hence, we got talking to Khordad Edulji, and tried to bind the music he produced in mere words. Excerpts below,

Definition Of Meraki Vibes And The Inception Of New Age Electronica…

The word Meraki comes from Greek origins and roughly translates to the soul that you put into your work or the soul that’s left behind in a piece of work. I found that quite fascinating as a concept. I chose the second part of the name after reading an interesting article on the psychology of stage names, which talked about using two diverging words strung together to peak the listener/viewers intrigue. Like “Pink” and “Floyd” for example. I was dabbling with a copy of FL Studio for the better part of two years whilst I was in law school, I’d seal myself off in my room after my classes were done and teach myself through online tutorials. I would work through the night, attend classes the coming morning, and then fall asleep (sometimes in class) to wake up at some ungodly hour to the same cycle. I also had the good fortune of playing DJ sets and jamming with other musicians at the university for various events on campus through the years. This helped me translate the rather introverted process of production to its polar opposite aspect of performance, which aided my understanding of how sounds work on larger systems and the differences in process and procedure when collaborating with live musicians.

It was early 2014 when I met Ashwin and Ashrith Baburao at a gig in Hyderabad and they told me about a music school they were running in Bangalore called Beatworx studio where they offered electronic music production courses. I had about a month and a half off during a winter break when I was in my third year and decided to spend that time doing a course at Beatworx. I think this was the turning point for me in many ways, making the switch to Ableton was a huge advantage in the sense of converting ideas better to finished projects, getting detailed feedback from professionals and having a structured module to streamline the learning process. I was very inspired by the work the studio was doing, as well the scene in Bangalore and decided to move here as I graduated from law school (mid-2015) to pursue this full time.

The Music You Make And The Genres You Seek…

I’m not a fan of labeling my music down to a specified genre, as I’m not consciously aiming to make something that’s clearly defined, but I think electronica infused house and techno is a pretty good categorization of the same. Call it whatever you like (except EDM)

There definitely seems to be strong influences from the kind of sounds coming out of Berlin, are there any inspirations or artists you look up to when you construct your works?Comment.

Most definitely, it’s been a long time dream of mine to visit Berlin and soak up the underground music culture they have to offer. Stephan Bodzin is a huge inspiration, some of the most well-produced work I’ve come across. Ulrich Schnauss, David August, Moderat, Petar Dundov, Gui Boratto, Christian Loffler, Kaitlyn Aurelia Smith, Jon Hopkins, Nico Stojan, Max Cooper, Chymera, Dorado and Sebastian Mullaert to name a few.

In Making People Aware Of The Music, Especially Someone Unaware Of The Specific Genre. It’s exactly like any other form of composition, where you use scales, chords and progressions to write the musical pieces, the very same rules apply to writing rhythms and grooves except here your task is the creator, composer, and even the engineer in a way. You’re solely responsible for all the individual parts, like the drums, keys, bass, leads and everything else you’d implement, plus you have to arrange the song and mix it down before it can be mastered. To give you an extremely simplified version of what mixing is, it’s a bit like sculpting; you’re cutting away everything that you don’t need, to create your final figure. It’s also a bit like painting where you choose your palate of colors or in this case sounds, just as certain colors work well together, the same applies to sounds. The advantage while producing music electronically is the convenience of having an entire orchestra of sounds, mixing boards and all the tools you could think of right within your laptop. You could also play any instrument you desired via a MIDI( Musical Instrument Digital Interface) keyboard or create any tone you can imagine via crafty sound design.

On releasing an album on Georgian based label Mistique Music, consisting of two tracks (From Deep Space A Seed Was Planted and Kissed By The Sky) instead of a longer compilation

I’d say it was more of an EP than an album, I’ve been following Mistique Music for quite some time now and I’m honored to have my first release on their label. Today, with the digitalization of music and the vast amount of choice out there, a lot of music gets lost or does not get listened to.  When you release a whole bunch of tunes together, especially as a fresh artist (like if there were five tunes, for example), not everyone will take the effort to listen to each and every one. So tune four and five might be left relatively unheard. I’d most definitely like to put out an entire album in the traditional format as well, though.

Underlying Themes Of The Works And Difference Perhaps..

Since the first track (Deep Space) dealt with the theme of space, I tried to incorporate elements relating to the same, namely the take off sequence of the Apollo 13 in the intro of the track. The first one was more dance floor oriented while the second was more for personal listening purposes. Since the larger theme between both tracks was the sky, in the second track, I incorporated the sounds of birds in parts and used airy tones and atmospheres. Although in all honesty, I think I’m at a very different place now, both mixing, as well as with my choice of sounds and I think that can only keep getting better with time.

Your independent releases (London Grammar- Hey Now (Meraki vibes edit) and Brian Cid-Hidden (Meraki Vibes rework) both have vocals to them while your label releases are purely instrumental, Comment.

I think there are moments for both, with lyrics it’s a lot easier to convey a message almost immediately, but I’ve come across a lot of people, especially in a club related scenario who prefer not have vocals interfere with the music in any way. In some cases, it can hinder the flow, but at other times it can be a welcome change. It’s all about timing and choosing the right moment to utilize the same. With underground electronic music, though, the people aren’t there to sing along to the music and make little hearts with their hands, it’s all about movement, the journey and the energy of the experience in its entirety.

Long time friends and family, Audio Units ( Ashwin and Ashrith Baburao) would be the first name in my books. Ashrith’s the most versatile producers I’ve ever come across. His attention to detail is brilliant and Ashwin’s hands down one of the finest multi-format DJ’s in the country. I’ve had the good fortune of jamming with Aman Anand a few times; I think he’s super talented and driven. He’s got an immaculate sense of groove, and I can foresee working on a project with him shortly.

I start with a musical idea first and then focus on getting a groove that works with the same. I play around in Ableton’s session view until I have a concrete idea and then build up the arrangement section by section, adding transitional effects and variation. I finally mix the track down and send it out to be mastered once I’m happy with the way all the sounds are working together. I like mixing certain elements from the go and finally touching them up with some extra effects to better suit the overall mix towards the end and give them a sense of movement in the stereo field.

How Do You Overcome The Creative Blocks If At All..

Sure that’s a part and parcel of the process. I try and work on my sound for at least four hours a day and sometimes this can be stagnating. I do my best to ensure I don’t give into the old writers block by taking regular breaks whilst I work, fifteen minute breaks every forty-five minutes. I also do this because I don’t currently own monitors (speakers) and solely work on my headphones (Beyerdynamic DT-880’s) so I do this in order to avoid ear fatigue as well as keep fresh. I do encounter creative blocks like anyone else and when I do, I simply read about music or watch a few tutorials and experiment without a purpose with new plugins, create patches, patterns or melodies just for the heck of it or organize my drum racks and libraries to make it easier for me to use in future projects or simply listen to music to find my stride once again.

I think it’s very well developed by now, venues seem to be more open to accommodate forward thinking music and artists, all credit due to the unsung hero’s of the scene, the promoters and event managers. It’s absolutely amazing, what they’ve been able to achieve as a collective in such a short time frame. ModeM Networks are responsible for developing The Tao Terraces into the most well-reputed properties for underground music in Bangalore. Deep Dictionary consistently brings down some of the best artists right through the year, Subkltr curates and promotes quality underground music at some of the best venues in Bangalore including ClOUDNYN, equipped with a Funktion-One sound system and INVASION believe in providing a platform to the best upcoming talent, with a quality over hype approach.

In Producing Two Exclusive Tracks For The Ashwin Maharaj..

The Ashwin Maharaj foundation provides patient rehabilitation through music therapy, helps spread awareness about stem cell transplants, promotes legal awareness and provides supplementary nutrition for Cancer patients undergoing chemotherapy. The foundation provides the following services at AIMMS New Delhi, Kidwai Bangalore and the Adyar Cancer Institute in Chennai. Ashwin was a friend of mine in college, he was diagnosed with Acute Myeloid Leukemia in the March of 2015, and fought courageously till the very end. His idea was to set up a foundation to provide for music therapy, which brought him immense pleasure during the last few months of his time, to raise awareness for stem cell research as well as legal awareness and to provide supplementary nutrition to patients undergoing chemotherapy. This was my way of giving back to this beautiful cause.

So that was Khordad Edulji, speaking about Music, Life, and Inspirations. Look out for more awesome projects in Electronic fusions coming out very shortly. And of course, follow his works here, Facebook, Beatport, SoundCloud, Instagram.

3,783 thoughts on “Meraki Vibes : The New Age Artisan Of Electronic Music In The Country”