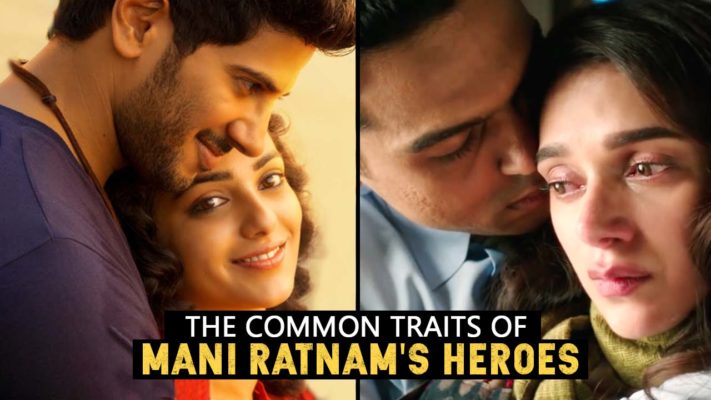 While we all appreciate Mani Ratnam for the movies he has made, I also have to thank him for the image of an ideal man that he gave to many-a-girl like me. If you look closely, you would observe that all of Mani Ratnam’s men are actually cut from the same cloth. I once read in an interview that Mani Ratnam shares some of his own traits with these characters. If that is true, it only goes to say that it is possible for someone like Karthik or an Adi to actually exist and that means I am going to find one of them. Maybe if I go to Chennai and take a local….see someone standing by the door of the opposite train…..hmm…..trip to Chennai, it is. About the common characteristics that these men share, below listed are a few that you are gonna see in almost every leading man in Mani’s movies.

Most of Mani’s fans would probably know about this one. Mani Ratnam loves the girl child and hence his heroes too, through their words or actions, have been known to show their love towards a baby girl. Bombay had a whole song about it, and who can forget the “ye devi varamu” (Amrutha / Kannathil Muthamittal )male version starring Madhavan. Maybe this was his way of supporting the girl child movement or maybe it was just his personal touch. But whatever it is, it sure makes you wanna call up your dad and have a nice long talk.

I remember watching “Yuva”, first-day first show because duh…Mani Ratnam. There is a scene in the movie, the introduction to Madhavan’s character, where he is just released from prison and the first thing he does is to go over to his in-law’s place to get his wife back. His wife sees him from the balcony of her place and calmly starts to pack up her bag, ignoring her parents’ protests. When the door opens, she rushes into his arms and he lifts her off her feet. It was magical. Although I was old enough to be a Mani Ratnam fan, I wasn’t old enough to understand things like love and relationships, but that moment and that scene gave me goals for love. His heroes have this similar quality of having their heart on their sleeve when it comes to their women. Check out similar scenes in “Guru” and “Amrutha”. Love rules.

All of Mani sir’s heroes have this similarity in physical appearance and character sketch. They fit the bill for the “tall, dark and handsome” type of men and they are never wayward or aimless. Even in films like “Alaipayuthey” or “Ok Kanmani”, where the lead men are these new age metrosexual city guys, they have an underlying rugged South Indian manliness about them and they take their lives and careers seriously. They dream and have legit aims. They are never made to look or act cute, childish or immature. Both their physical appearances and their characters are calm, composed and collected. They always have their life sorted out, in a way. Even Siddharth’s character in “Yuva” which depicted the laid-back cool attitude of the current generation, harbours a serious dream of going to the United States. I like to believe that in writing characters like this, Mani Ratnam intends to send out a message to the youth that life is all about being in control.

Rack your brains and tell me of one single scene when you saw any Mani Ratnam’s male lead walk into a temple on his own accord to pray. They never do that. You can take up any random movie of his and look for a temple scene and notice how the hero finds an excuse to not enter or stands clueless, not knowing what to do if he does enter. Even in “Alaipayuthey”, before Madhavan enters the temple, he runs into one of his mother’s friends who expresses surprise on seeing him there and mentions that he always says there is no god or devil. Now, is it an atheistic principle that he has or does he just not believe in idol worship, we will not know, but this is one trait his heroes share. A point also to be noted here is how his heroes never have the Big Fat Indian wedding. They are always just close events and almost always registrar weddings. A nod to the socialistic principles? I think so.

These traits mentioned above make Mani Ratnam’s men stand out from all other heroes. And for me, this is what makes them desirable. And I think I speak for all womankind when I say that these qualities in a man make him a sure thing. A keeper. Now, I know films are fictional and sometimes affect society in a bad way, but there might be people out there who get influenced in a positive way through movies and learn and make changes in their lives accordingly. I suggest the men, take a peek into his movies and see if you can pick something up. Just a little add-on to your personality for some amazing results in a very short time. You can thank me later!

More wonderful exhibits of Mani Ratnam’s Men, which depict the strong and yet vulnerable personalities in them.

The Raw Heart Of Poignant Love

Being Point Blank And Joyful

Finally, The Mani Man In His Glorious Self