[VoxPix Selects] Meet Rhoya : A Woman Who Is Out There To Live her Dreams Despite All Odds 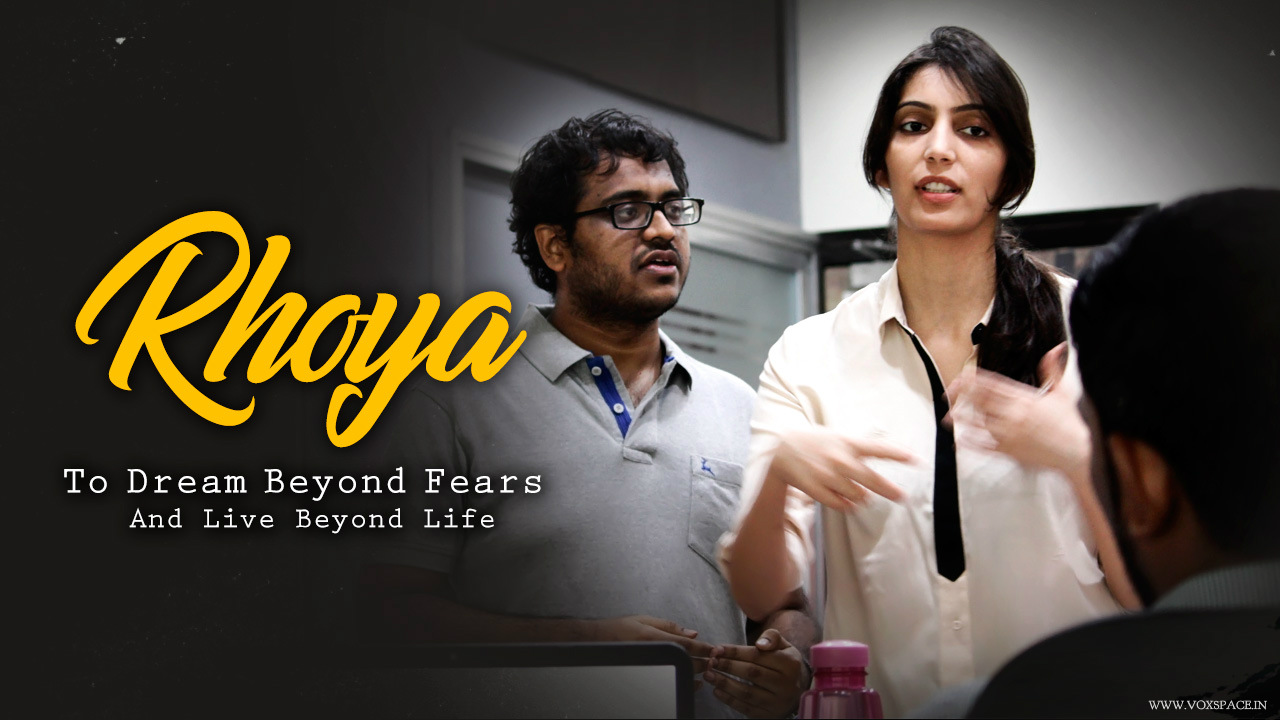 Today we talk about Dreams and the will to fulfil it. And when you look at this thoughtful feature Rhoya, we bet you’ll go back to the time when you had dreams which meant something. You’ll remember the path you took to reach this point and more importantly the paths you left unexplored. Rhoya, a feature about a young woman trying to overcome all odds and achieve what her dreams mean, is everyone of us in more ways than one. Rhoya is presently looking forward to crowdfunding to complete the shoot and bring out the inspirational tale. We were thoroughly impressed by the thoughts aspired by the feature and got in touch with one of the writers of Rhoya, Ms Helly Thakkar, and got to know more about this exciting project…

Definition Of Rhoya And What She Stands For

Rhoya is a name based on a Persian word which means ‘a dream’. It is the protagonist’s name in the film given to her by her father, who himself is a writer and since her childhood has encouraged his daughter to dream big and believe in it, come what may. Everybody has dreams, but most of them give up in the middle of their pursuit. From our own personal experiences, we have known people who blame a lot of factors for their failure to achieve their dream. They form a comfort zone that gives them a right to accuse the rest of the world of not being inclusive towards their art.

These people could actually revolutionalise the world had they really analysed their own work and tried again. But cynicism has become a comfortable pillow to fall onto. Every time a dreamer gives up, we lose a great poet, a great architect, a great scientist and so many more innovations. This is a film that wants to pull them out of their graves of hopelessness that they have themselves dug. This is a film that does not address dreamers but those who have given up on their dreamers.

The Journey Of Rhoya From Its Inception To Production

We believe that you can make a film only about what you strongly believe in. After completing our post graduation from SIMC, Pune, we had been in Mumbai for a couple of years now. We had seen a lot of people give up on their struggle and that hurt us. Because these were the people who were highly talented, passionate and could have made a difference in their fields. These people have now become sceptical and blame the system for their failure. We ourselves decided to keep going still and make a film because that is what we had come to Mumbai for.

When we were discussing potential plots, we couldn’t find anything that was very resonating. Then we realised that we can only write about what was terribly affecting us at the time. And that’s why we decided to address this very issue more than anything else. We didn’t really have to ‘gather’ a team. We have been a team ever since we were in college together. That experience helped us share our ideas and skills and we knew we enjoyed working together. Even the Casting Director of Rhoya, Mr Harssh A Singh had come to our college to do a workshop. He came in as a guest lecturer and soon became a friend. By the time we were ready with the script of this film he was already an established actor in Mumbai. The credit goes to him for helping us find the right cast. It is not easy to believe in ideas of two clueless newcomers. But he did. And made everybody else do the same.

The vision was collective. It never so happened that we had difficulty communicating the vision to our team members. The issue discussed in the film is very perennial and everybody in the team identified with it. The only problems that we have had with team management are mostly related to the professional commitments that everybody, including us, has had to juggle with while working on this film. The whole team had been notified by the producers (Ketan and Helly) that they must not expect any sort of monetary returns from this film.

So all of us had to lead a dual life, one for the money, one for the passion. And leading a dual life while making a feature film is not a joke. There are people out there who get time and money to make a film, we do not have both. That’s a luxury. You start feeling that if you had more time to the film, maybe you can do something better with it.

The thought of making a full-length feature film is intimidating. But we are highly driven by real life examples where people have taken bigger risks and have succeeded. Nolan made his first film with this friends, shooting only on weekends. If that doesn’t get you started, what will? Also, we decided to not look at the monster as a whole. We focus on day to day tasks. And that will end up creating the bigger picture all by itself. It is not that we did not want more people on board. And maybe they would have worked for free as well. The burden of responsibilities that we have is by our own choice. If we had gotten more people involved it would have taken them some time to gel with the kind of framework we function in. And we did not have that kind of time on our hands. having multiple responsibilities also makes us learn skills that we did not have before. Makes us more independent.

Back in Baroda, even though she was performing well in her Computer Engineering course, in the heart of her heart, Helly Thakkar always knew that she wanted to be an actress. To her, becoming an actress meant that she had to be geographically present where the industry was- Mumbai. But coming from a conventional background, that would have been a bold step to take. She had to have an excuse to be here. She had to be a media professional. To do that, she would have to learn to be a media professional first. So she went on to do a course in Journalism at SIMC, Pune.

Expectedly, that did get her to Mumbai, to work in a digital ad agency. But attending auditions along with the job was making her feel stuck. So she decided to freelance and quit the job in 5 months and was now free to do whatever she wanted. After attending numerous auditions, acting courses, she realised that she doesn’t just want to act. She loves the whole process of filmmaking. Now she didn’t want to just be in a film, she wanted to make one.
Helly and Rhoya are pretty similar. Both are not just crazily ambitious, but they have a compassionate agenda that their ambition will serve. Just like Rhoya is selling dreams, Helly’s film is encouraging people to not give up. There is a very evident and conscious motivation to change the status quo.

Crowdsourcing Rhoya The Project And The Factors That Weigh In

We have taken this film to production houses. But the more the money of one particular person is involved, the more that person makes sure that the creativity of the film suits him or her. We wanted this film to have a transparent expression. We wanted to freely address the audience by ourselves, in our own voice. So we knew that crowdfunding was the way to go. As the risk gets dispersed among a large number of individuals, nobody is scared of losing their money. And so we get to say what we want to say, fearlessly. The other plus point is that before making the film itself, we are getting a lot of encouragement from not only our friends but also people we have never met. The contributions coming in from all sorts of different places are very reassuring. The Message You Want To Send Across With Rhoya

It is said that the ‘story’ is the king. That it is. But when you want to reach a wider audience, you have to make sure that your story is easy to watch, it has to have smooth visuals and sounds. We do not want to compromise on the basics. And that’s where we are going to have to spend more- the shooting equipments and the post-production of the film. Passion comes free of cost, but the pursuit has its realities.

An Advice For New Projects To Prosper

Our advice would be that you should be madly in love with your story and should do whatever possible to make it happen. Do not wait for the universe to conspire to make your dream come true. Only you can do it. Not that we are in a position to advise, we ourselves have just begun. But we do know that the dream seems much closer when you start walking towards it. As for those who have given up, we hope our movie speaks to them and they go on to do something revolutionary and important.

This was the story of Helly Thakkar’s Rhoya which stands as a beacon of inspiration and shapes up as an important project to be supported. Head out to their campaign page on Wishberry right now, and help them bring out this feature right away..!! (PS: Exciting Rewards await you, so check out the project in the link above).

Check Out Our Other Crowdfunding Picks Here:

The Man With The Yellow Plate and Bhasmasur. Spread The Love..!!

6 thoughts on “[VoxPix Selects] Meet Rhoya : A Woman Who Is Out There To Live her Dreams Despite All Odds”