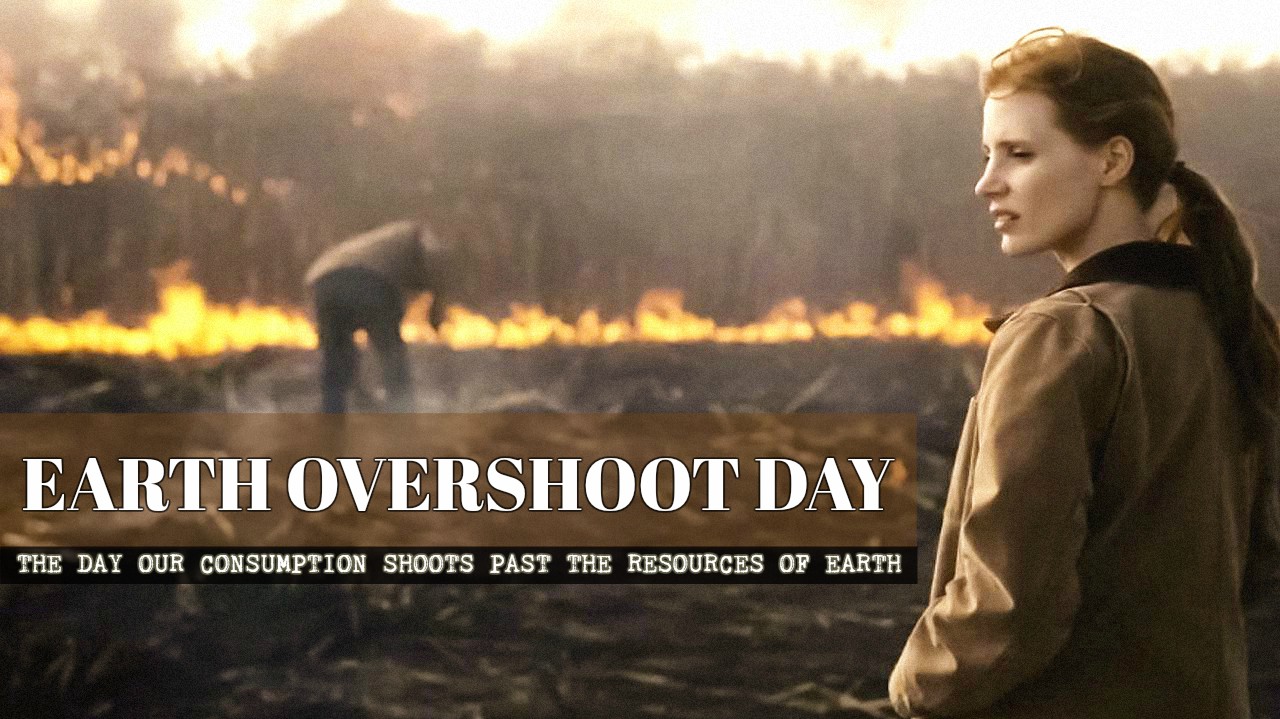 When I first came across this term, Earth Overshoot Day, it struck me as a phrase which was straight out of Interstellar. If you are wondering how does space travel reflect the Earth situation, well stay with me? Do you remember the way Cooper (Matthew McConaughey) finds out about the secret NASA base, and how Dr.Brandt (Micheal Caine) explains to him how space travel is the only way to save mankind? In this context he says, people are running out of food, practically showing Cooper how a wheat crop withers away. The word Earth Overshoot reminded me of that particular scene. And brought back a discussion on the bewildering resource consumption that mankind had taken for granted. And it is here. The day when we have finally overshot the resources that we have available on Earth. Our demand has finally exceeded the supply.

Humans have already used up the year’s resources of Water, Soil, and Earth. This means that, what was supposed to be our allotted yearly ration of these natural resources for 2017, have been depleted in 7 months. “By August 2, 2017, we will have used more from Nature than our planet can renew in the whole year,” say environmental preservation groups, WWF and Global Footprint Network. The report goes on to explain the phenomenon in the following way,

“Earth Overshoot Day means that in seven months, we emitted more carbon than the oceans and forests can absorb in a year, we caught more fish, felled more trees, harvested more, and consumed more water than the Earth was able to produce in the same period.”

At A Universal Level: What Does Earth Overshoot Mean?

The Earth Overshoot Day plainly is calculated every year. Look at it this way. Let’s say, you buy your monthly ration of groceries at the start of the month. Now, you start to track how and when it gets consumed. As you consume all the groceries, you have a date by which you are done with them. From there on, to the month end, you are running on overdraft or Overshoot facility. The exact same thing is applicable here as well. We have consumed what was supposed to come for the year, and have now Overshot.  And will continue to do so for the till the year end, or the next four months.

Earth Overshoot Day was previously known as Ecological Debt Day. The day is when the global population’s demand exceeds the amount of resources that Earth can produce for the year. The date has slowly crept up from Dec. 21 in 1971. “Most people think it’s relevant to know how much they earn and spend,” said Dr Mathis Wackernagel, CEO of the Global Footprint Network and co-creator of the Ecological Footprint.

The Ecological Footprint, discovered in the 1990s, is the only metric that measures how much of nature’s resources we use and how much we currently have. We can spend twice as much as we earn for some time, [but] even if your fortune is big, it’s going to go down,” Wackernagel said.

According to campaigners, the equivalent of 1.7 planets would be needed to produce enough natural resources to match our consumption rates and a growing population.

The Calculations And Other Metrics Involved In Earth Overshoot Day:

In a simple way, you need to match demand with supply to see the shortfall. However, since you cannot particularly quantify the renewable resources, you need to calculate it in a complex manner. The method involves, comparing our Ecological Footprint with the planet’s biocapacity. If you are willing to try it out, you may head to this portal to calculate your Ecological Footprint. The tool by Global Footprint Network, measure your Ecological Footprint and matches it with planet’s Biocapacity of your particular region or need. Thus, one can understand if one has completely depleted his or her resources. In other words, we look at our total annual consumption and Earth’s ability to produce useful biological materials and to absorb carbon dioxide emissions.

Comprising only about 5 percent of the world’s population, Americans use about 25 percent of the planet’s coal, 26 percent of its oil and 27 percent of its natural gas, according to the Worldwatch Institute. We’re borrowing time, or we’re going into debt, to borrow resources from the future to sustain our way of living to fulfil what we are consuming,” says public speaker and blogger Kathryn Kellogg.

According to the Global Footprint Network, cutting carbon emissions in half would give the planet about three additional months before reaching overshoot. They make up 60 percent of our ecological footprint.
Because personal transportation takes up 14 percent of the carbon footprint, the Global Footprint Network noted that reducing driving by 50 percent worldwide would push the overshoot date back 10 days.

Thus, we will have to ensure a safer passage to time to save the humanity before we run out of food. We cannot leave our future generations hungry, basing on the luxuries we have today. It is not right.