Posted on November 11, 2017 by Avipsha Sengupta 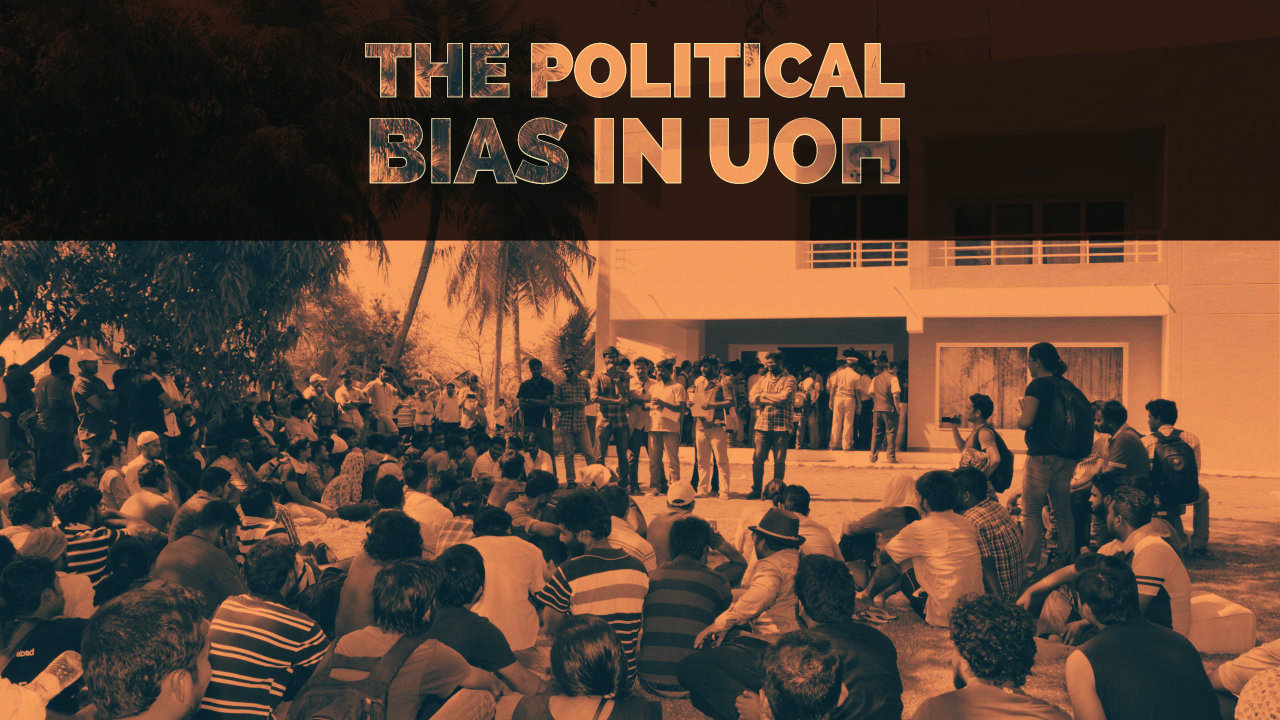 Is UoH Administration Targetting Students With A Particular Political And Ideological Affiliation In The Name Of Disciplinary Action?

The students who lived and witnessed the campus of the University of Hyderabad (UoH) during Rohith Vemula’s death must be going through a feeling of deja vu. The whole incident of ten students being suspended citing breach of discipline by the UoH administration simply has too much in common with the incidents that led to the death of Rohith about two years back.

A supposed breach of discipline, accused student not being permitted to put their side of the story, the arbitrary and oppressive reaction of the administration, a botched up committee to disperse verdict and above all the right wing bias has all been the salient features of both the cases.

(Read Our Exclusive Presentation Of Disciplinary Action On 10 Students Here)

UoH administration being biased toward right-wing students is not exactly fresh news. The systematic oppression of free speech and dissent is evidence enough that UoH administration stands for saffronisation, not to mention the Brahmanical and patriarchal attitude. In fact, the involvement of the right-wing national government in Rohith’ case which was evident from Smriti Irani writing a letter to Bandaru Dattatreya to look into the case was a clear indication of the nexus that UoH administration shares with right-wing politics. However, the recent case of suspension and many other instances have made it more blatant and obvious.

Too Much Of A Co-Incidence?

Firstly, it is interesting to note that a some of the suspended students shares a particular political affiliation, including GSCASH representative Tinanjali Dam who belongs to Alliance for Social Justice which along with other student organisations is an alliance between two of the largest student organisations in the campus SFI and ASA, and Sai Kumar Yamarthi, who happens to be the Secretary of the UoH SFI unit. Apart from these two, few of the other suspended students are known to be active in their disagreements with the regressive antics of the administration. Taking a closer look at the incident, it just seems to be conveniently in favour of the administration.

One who understands the inner working of the campus can also assure that a raid does not take place without some blowing the whistle and people who reside on campus can re-affirm that J and K hostel has a sizeable majority of students belonging to the right wings student association. Also, UoH administration working in alliance with right wingers is also a throwback to the time when two months after Rohith’s death VC Appa Rao Podile entered the campus to resume his office and help was sought from right-wing students to make the procedure smooth and efficient. The police crackdown that followed is still fresh in the memories of many.

In fact, some sources have also alleged that the room of one of the senior ABVP cadres is not new to female entries.However, he or his room has never been on the receiving end of any surprise raids or disciplinary actions. In fact, according to sources who wished to remain unnamed, just a few days back a student was simply asked to meet the warden and take back his ID after it was confiscated in a very similar incident that led to the suspension of these ten students. If the account is to be believed, then it the administration’s bias attitude cannot be any more evident.

Not Another Rohith Vemula

In light of the recent incident, the administration has also decided to double up the surveillance system in the campus. A recent circular has confirmed installation of CCTV cameras in different places to track the movement of the students. Many on the campus are arguing that this measure has been taken up by the administration to specifically target students who have been demanding justice and does not fit in the scheme administration’s right-wing agendas. If the present antics are anything to go by, then the accusation does not seem too far-fetched.

The agenda of the UoH administration is clear, target the students specifically who dare to give their dissent a voice and point out the Brahmanical and patriarchal nature of administration. Even the pattern to realise this agenda seems to be similar to that used by the administration during the case of Rohith Vemula.

With one side endorsing Brahmanical, patriarchal and downright regressive ideas and one side arguing for free speech, dissent and liberal ideas, the ideological and political conflict seem to have reached an impasse In a situation like this one can only hope, that this incident does not have an end as unfortunate as Rohith’s case.