[VoxSpace Selects] Imran Pratapgarhi : A Poet Who Thinks Beyond Poetry 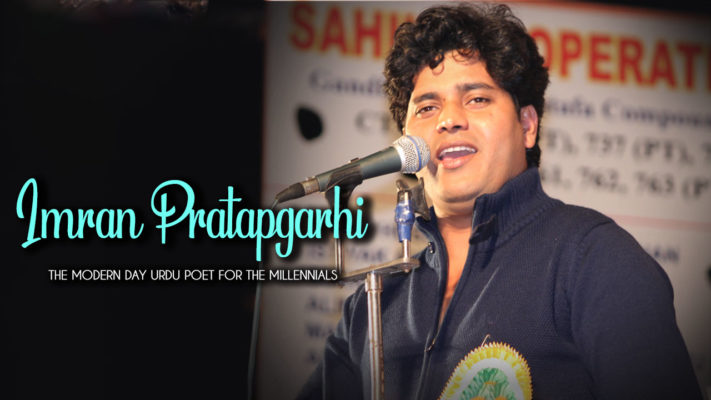 Mohammad Imran Khan, popularly known as Imran Pratapgarhi is a renowned Indian Urdu and Hindi poet and lyricist. A source of inspiration for many, he’s a revolutionary poet whose ghazals and shayaris are known to have a magnetic effect on people thus drawing tens of thousands of people at his mushairas.

The 30-year-old internationally acclaimed rockstar poet is bestowed with a passion for creativity since his childhood days, which has been his biggest asset and gave him hope and direction to follow his heart. He has an outstanding ability to press together the prevalent social and political halo in just a few lines, which have gained him recognition not only in India but in various other countries like Saudi Arabia, US, Oman, Pakistan and several European countries.

His shayaris and ghazals are not only meant to entertain people, he uses his talent as a platform to spread awareness against the corruption prevailing in major political parties and to raise a voice against the injustice towards marginalized communities. Pratapgarhi started participating in mushairas in 2008 and since then he has written over 100 nazms, including Filisteen (about the suppression of Palestinians), Najeeb (about the disappearance of JNU student Najeeb Ahmed), and Umar (about the victims of mob lynchings). Among his various nazms, the nazm ‘Madrasa’ received huge appreciation and fame, which according to him was inspired by the intense focus of media on the madrasas as a consequence of the series of terror attacks. One of the most popular lines from this nazm is ‘…mila hamesha chahat ka paigham madrason se, mat jodo aatankwad ka naam madrason se koi ilzam madrason se…’!

Pratapgarhi has gained his inspiration from Habib Jalib, a famous Pakistani poet. Through his power-packed fusion of Hindi and Urdu poems, he won hearts wherever he staged his mushairas. Through his poetry, he talks about socio-political distortions on one hand and on the other he spreads the message of love for one’s country, people, nature, religion, and social harmony.

When Aspiration Led Towards Inspiration

Mohammad Imran Pratapgarhi was born on 6th August 1987, in Pratapgarh, Allahabad to Mohammed Iliyas Khan, an Unani medicine practitioner and Sajida Khan, a homemaker.  He was the second of 10 siblings. After spending his childhood in various cities of Uttar Pradesh, he relocated to Allahabad in order to complete his graduation from Allahabad University.

Though he pursued science, he always had an inclination towards Hindi literature and poetry. He started writing poems when he was in 5th grade and also performed various stage shows. He had a keen interest in attending mushairas and participating in Kavi Sammelans and other such literary events. Therefore he started contributing his time and skills to literary sources. His quick wit, strong dedication and immense love for poetry led him to gain recognition and since April 2005 he has captured a lot of hearts.

Other than poetry, his true happiness lies in works of charity. At one of his felicitation events, Imran Pratapgarhi revealed that he is planning to establish 100 primary schools for Muslim community all over India starting with Uttar Pradesh.

His nazms and shayaris have won him accolades everywhere. He’s been felicitated with honour several times. He is a three-time National Award winner for debate and poetry- Urdu Academy award in Saudi Arab, Red Cross Society Orissa’s Vishist Vidyarthi award and Sadbhavna award by Maharashtra Municipal Corporation. He’s also been honoured with Prakash Media Prakashan Award in 2005 and 2009. In 2007 he won Firaq Gorakhpuri Award and in 2016 he was honoured with the Yash Bharti Award– highest award of Uttar Pradesh government.

The Story Of Endurance And Perseverance

No matter what you do and how much you try, you can never make everybody happy. Fame and popularity always come with little, sometimes a lot of criticism.

Pratapgarhi had his fair share of critics. Apart from getting trolled on social media, receiving insulting and undermining hate mails and threats he’s also detested by various Urdu poets.

Munawwar Rana, a famous Urdu poet, had refused to share a stage with him stating that he lacks respect for other shayars. But he has never let the criticism and hatred come in the way of his dreams. To his critics, Imran Pratapgarhi says that poetry isn’t just about reading out loud what you once wrote. He believes it can raise awareness among the masses, and he was willing to do it even if it comes at the expense of being marginalized by his peers.

Aristotle, a famous philosopher had written “There is only one way to avoid criticism: do nothing’ say nothing and be nothing” and Pratapgarhi has very clearly followed this as he asserts that he believes in enjoying his life without comparing it with others and without getting influenced by the criticism.