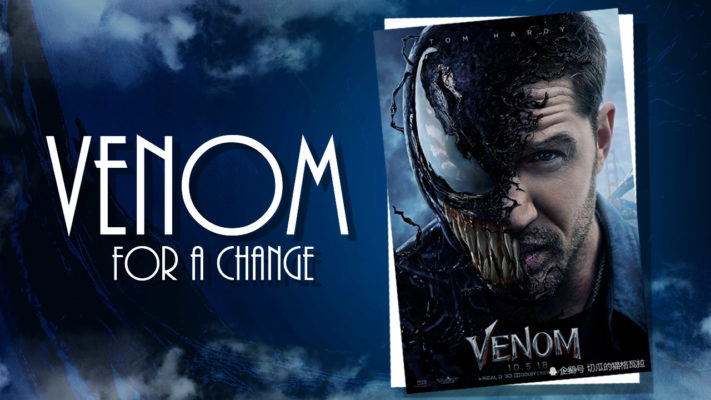 Okay! I am excited. I am not going to go on the high road; I am not going to pretend that it was just another day for me when the Venom trailer dropped because it made me geek out and I am sure I am not the only one. However, wait, what did you just say? We had too many superhero films recently; how’s Venom any different? Hold on, let me just make sure that you get things right. VENOM IS NO SUPERHERO. Should I repeat it? VENOM IS NOT A SUPERHERO. There, now I am happy that we got that right and that’s the beauty of it. Venom has never been a superhero; he doesn’t have a holier than thou mission; neither does he have the urge to save the world. He’s simply not interested in a moral aspect of what he’s doing. This is what makes him unique in the world of goody two shoes. He doesn’t play by the rules and he doesn’t have the messiah complex. He’s an anti-hero and that again is too loose a term to define him.

Commencement Of The Journey

Venom is primarily known as one of the greatest villains that Spider Man ever had to fight. With Todd McFarlane, Erik Larson, and Mark Bagley holding on to the reins of the character during the 90’s; the character developed into a comic book hero that often walks between the lines that demarcate the good from the bad.

Just for the sake of setting things in perspective, Venom is not a full-blown character in itself; it’s a symbiote that needs a host to bond with. In fact one of the first characters that this Venom symbiote bonded with was Spider Man himself and he enjoyed being the host; well, primarily because he didn’t know that he was being one (beat that Ekta Kapoor!) and also because the symbiote or the “suit” could morph into street clothes and could provide him with stronger and inexhaustible webbing (what else do you need?). However, once Peter Parker or Spider Man learned that the suit was an alive and sentient being and was controlling his body; he got proactive to ditch it. In the end, after much shenanigans and finding out that the symbiote didn’t do well with sound and intense heat; Spider Man finally managed to give the Venom symbiote the slip in a church.

The story progresses and we meet Eddie Brock; the most famous Venom symbiote holder/recipient/ bond-er (yes, this is the most confusing bit), who shares a deep hate for Spider Man and also has cancer. Eddie, with his career ruined by Spider Man, diagnosed with terminal cancer, disowned by his father, abandoned by his wife (this is a comic, don’t dwell on it much), goes to the same church where Spider Man had once ditched the symbiote. Symbiote likes Eddie; Eddie likes symbiote and long story short, you have Venom! The anti-hero, with a shifting sense or morale and purpose, who is anything but good and upright and this makes it quite an amazing character in the middle of all these heroes that are scampering for the greater good.

If we scurry to the first time we saw Venom on the screen; we would be up for disappointment. It was in the Tobey Maguire days. The Spider Man 3 movie was a disaster with no character development, no proper screenplay and shoddy treatment. Yes, Venom emerged for the first time on the big screen in that movie but it was almost laughable.

Spider Man 3 was back in 2007 and this is 2018. Things have changed a lot; from the nascent stage of blind appreciation for superhero movies, we have become harsh critics. We have survived a Justice League and an Infinity War. The stakes are much higher this time, this is because we would not simply be happy with a story and a superhero slammed into it. We need pathos; we need hubris and we need the character to go somewhere along the movie as an emotional journey, rather than just do his/her bit of heroics on the screen. This is the era where we want to see the emotional connect of our heroes, and Venom couldn’t have a better time to be on screen.

Venom or the symbiote and the host share a very strange relationship; there is constant turmoil between them to do the right thing or make a mess. It doesn’t have a messiah complex that I mentioned earlier; rather, it is governed by the need to survive and it will do all it can to do just that. This makes the character a far cry from all we have seen on the screen and it’s about time! All the superheroes have exhausted their antics; the time the theatricality is gone. Venom might just be the thing that we have been waiting for; something that has a pure energy, a good dose of villainy and more shades of personality in it rather than just the good or bad or the urge to do the right thing all the time.

By the trailer of the movie, it appears that we will be starting off with an origin story of Venom. This upcoming movie will be more about Eddie and the symbiote coming to terms with each other and setting down some ground rules. There is a part, where Tom Hardy goes and I am paraphrasing here – ‘Well! If we are going to hurt people, let’s just make sure that they are bad people’ – that’s negotiating with a symbiote 101. Also, Eddie and the symbiote are also shifting from their true comic root, which means the origin story is not one that has been picked up from the pages of the comics; instead they have been given the brand new ones.

Also, we see more than one symbiote in the start, which means that we might get to see Carnage here (another symbiote story). Add to that Eddie, played by the amazing Tom Hardy, no longer writes for gossip magazines after falling from glory, as he did in the comic books. Here, he is an investigative journalist. The message is clear, “embrace your inner anti-hero,” which means that the makers are going for the guts with this one.