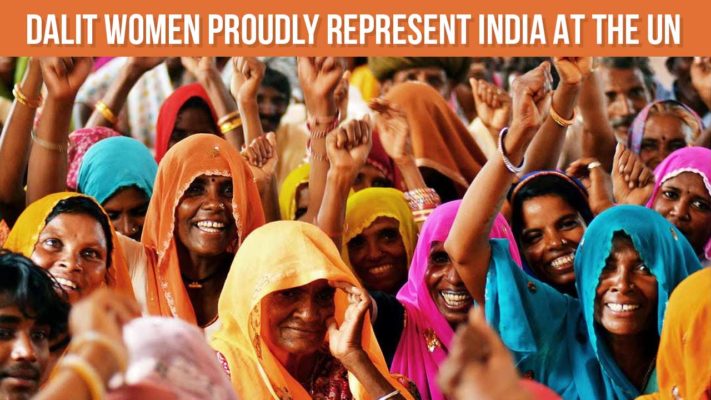 Uprisings by Dalit community are not unheard of in the history, eminent figures like Savita Ambedkar, Shantabai Kamble, Kumud Pawade, Ramabai Ambedkar, Babytai Kamble and Vijila Chirrappad amongst others have struggled to build a narrative on Dalit lives and experiences in India.  However, the presentation of a synchronized report on Dalit tortures and inhumanities at an international level is here to make its own history.

On June 18h, 2018, the general secretary of All India Dalit Mahila Adhikar March (AIDMAM) Asha Kotwal spoke about the organized caste-based violence against Dalits that goes on in India, at the UN Human Rights Council. The report ‘Voices Against Caste Impunity: Narratives of Dalit Women’ not just chronicles perils of thousands of Dalit women, but is a weapon for the voiceless to narrate their experiences of tortures and pain for being a Dalit in India. The event which was aimed to speak against caste-based violations in India created history by choosing UN Human Rights Council as its platform. Many people are hopeful that this will curb the absurd notions of caste, purity, superstition, organized hatred, and class oppression so that they can embrace universality and respect.

The event which ensued from the inhuman tortures and regressive views that are commonly associated with Dalit community takes us back to what Dr Ambedkar had preached about caste-based violence as a hindrance to social progression, political reformation and mutilation of spirit. A powerful and historically accurate short documentary named #DalitWomenFight was also shown in the event, which is however available on Vimeo. The documentary shows Dalit women belonging from the remotest of regions marching forward with photos of Dr Ambedkar, demanding validation and answers for brutalities and torments that the community has been subjected to.

To anybody who is unaware of the precarious situation in India and shameful agonies that society has been inflicting on the backward communities, the documentary is a powerful and democratic commentary on that. It furthermore informs about #AchheDin where a majority of rural Indian population are more in favour of adhering by the tenets of caste-based subjugation and oppression passing the custom from one generation to the next. The sheer fact that the repressed women, after carrying the burden of a wounded psyche for generation after generation, are now seeking to create a dialogue stating years of autocracies, that kills hundreds of Rohit Vemulas every year. It is shameful for us to be a witness to such regression, which has as its consequence somewhat failed to grant a human life to these people belonging to a marginalized section of the society.

In the event, the report on severe injustices inflicted on Dalit women was presented in front of important personalities like Rita Izsak-Ndiaye and Dubravka Aimonovi. At this juncture, it is also important to talk about the rather unheard of Dalit feminism, a collective voice against the castrated people of the society whose mere existence is considered to be a pollutant. This group of women and activists fell victim to layers of organized suppression, needless to say, these layers were more intricate than the ones any upper-caste women had to confront. To elucidate more on the point, Dalit women are not spared from Dalit patriarchy, yes, perpetrating more to the violence and suffering of these women, piling up the missions they had to accomplish to make their voices felt.

Women belonging to the Mahar community had tried to document practices and norms that were associated with this caste. Dalit patriarchy, like any other forms of patriarchy, has inflicted trauma on both men and women, which had always stayed out of the peripheries of government and justice system. The event can be therefore termed as the outburst of years’ of injustice and shame, a chunk of which had been denied any form of recognition even by history, as it is said history had always favoured the victors.

At this juncture, I would use the opportunity to name some of the Dalit women poets- Sheetal Sathe, P. Sivakami, Urmila Pawar. They have incredibly used the genre to give a shape to years’ of unbridled torture. It is equally important for us to read their works and recognize their contribution amongst the thousands unnamed working for emancipation and justice.

Human-Rights Violation And Violence On Dalits Are Synonymous

The report made it very clear about what Dalit women go through are heinous in nature, where many voices have been silenced, it is also a fact that many voices are yet to be tainted with knowledge. It has been quite evident that even today many families are not aware of the extent of injustice that they are putting up with. Many women are afraid of coming to the forefront due to the power structure functioning, people choking the community owing to their privileges and power. Social stigmatization is another factor that has kept a number of these instances in the dark. Violence and injustices against the community are on the rise and a number of these cases are never to attain the light of justice.

Let’s talk about the first Dalit actress, P.K Rosy of the Malayalam industry, who was driven out of her village in Tamil Nadu for her crime of playing an upper-caste woman on the silver screen. This extremely talented and brave woman of her times is yet to receive any posthumous award or recognition by the government. Her contribution and story are yet to be spread widely and I hope the event will be responsible for bringing back history and locate it within the present context. The disparity between awareness and lack of awareness that Dalits possess can be eradicated only when these issues are addressed properly at a larger platform.

What Does The Event Remind Us Of?

According to National Commission for Scheduled Castes and Scheduled Tribes, 2000, near around 75% of Dalit girls are compelled to terminate their primary education. Over the years, history has shown us how certain professions like carrying corpses, disposing human waste, acting as human scavengers, sweeping, and other painful labour activities are strictly reserved for this community, the event made it clear that such practices have been normalized by the society and 85% of Dalit women are prey to this system.

This event along with reports and documentaries are pitiful reminders of the fact that  Dalit related crimes which frequently triggers off sparks of protests, fetching media attention have in reality failed to eradicate the evils from the society. There are many Dalit activists and reformers both in the past and present, however, they are muted and silenced daily and are pushed back to darkest pits. This event is also a reminder of how aware the community is about the dubious situation surrounding them, victimizing them, and snatching away from them every ounce of dignity and respect expected out of every civilized society.

Silencing the marginalized and its most straightforward instance is the censorship of ‘Annihilation of Caste’, in a progressive and democratic India. I would argue that one of the possible reasons might be the fact that the undelivered speech by Ambedkar squeezes the issue from its very core, elucidating on the results of such a society, to quote a line from the passages, I would choose “indifferentism is the worst kind of disease that can infect people”. Decades later, the above-stated event in the 21st century only has accentuated, what had been anticipated by him. Many Dalit activists belonging from the caste itself have been wiped out from the face of history. However, the above event that took place in Geneva remains triumphant, resurfacing protests and demands of these people for their legitimate place in history and in present society.

Pledging For A Better Society

Caste-based discrimination is definitely a threat to national integrity and therefore should be eliminated at the earliest. At the same time, writers, dramatists, and activists need to be given their true place in history so that their efforts are not lost into oblivion for political reasons. Notions surrounding untouchability, restricting Dalits to a predetermined profession and sexual assaults are some of the biggest problems that we have at hands currently. The very fact that Dalit workers cannot ask for a proper remuneration in exchange for their hard work from the upper-case masters is undemocratic in spirit.

It is only events like these that have the power of eradicating the malevolence by functioning in three ways- spreading mass awareness and not concealing the wrongdoing under the rags, gaining a bigger platform and in the process educating thousands of people who practice the depravity without knowing its aftermath and implications.

Related posts:
[VoxSpace Life] What Does It Mean To Be A Transgender In A Country Like India?
[VoxSpace Life] Dark Life Of Her : The Story A Girl From Birth To Death
[VoxSpace Selects] Why I Can’t Relate To The Leading Ladies Of Indian Cinema