[VoxSpace Life] Modern India And Its Tryst With Indian Mythology 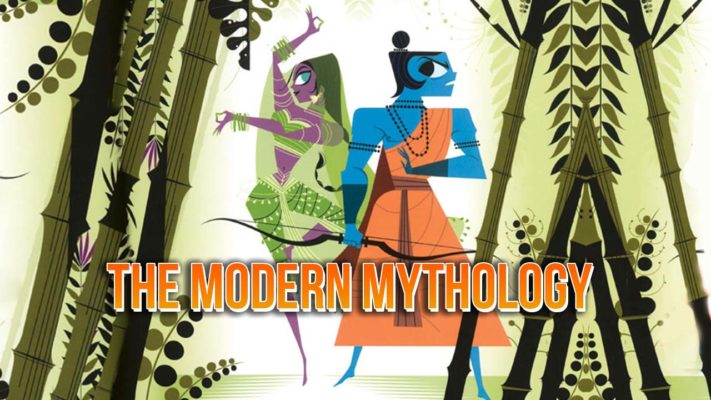 One Of The Greatest Mythologies Ever

Think of a large river. One that is long and wide enough to cover vast spaces of land with its tempestuous waves and small enough to form pools of water in pockets of land, that helps animals and birds quench their thirst. Now imagine this river to be well over 10000 years old. Imagine that it has always been this way, since time immemorial. Imagine this river to be the very blood of a country. A country that existed and still does, before other countries were even formed. This river would well be considered to carry the soul of a nation, a civilization itself. Our river here may or may not be real, but taking it as a metaphor, we can compare this river to the greatest treasure our country inherited from the ages- the Indian Mythology.

Over the years, Indian mythology has held its significance in our culture and society. It has shaped people’s lives in many ways. During the time of independence, Gandhi developed his moral code based on the teachings of Ram. Well before that, during the time of the Qutb Shahi Dynasty, bhakta Ramadas lived his life with the word of Ram on his breath. 400 years later and his music and songs have become embedded in this affluent bank of our mythology.

As globalization has taken over our subcontinent, with our country opening our gates to the streaming inflow of other cultures, primarily from the west, our mythology has taken quite a backseat in our current generation. Scriptures like the Vedas and the Puranas have been kept aside to make space for the diverse fantasy literature that has gripped the nation. With the advancement of technology bearing more importance than the differentiation between right and wrong, our mythology has seeped into the cracks of the past. Devdutt Pattanaik, a renowned author, known for his works on Indian mythology, says that the Indian denizens fail to connect to the rich Indian mythology. People fail to see beyond the stories of the past. The symbolism that exists in each story is lost in thick fat tomes of scriptures that a commoner cannot understand. Scholars and other enthusiasts of the Indian Mythology have helped decode many of the scriptures and have made them available to us in many forms.

Indian Mythology In The Modern World

One of the more famous works is the Amar Chitra Comic Collections. These books tell many mythological stories in rich detail that are fairly easy to understand as well as are quite comprehensive. The illustrations that are depicted not only catch the eye of a common reader but also those of children, introducing them to the vast stores of our mythology.

In the year 2010, an author by the name Amish Tripathi debuted his first Novel, Immortals of Meluha. This was a hallmark work in the history of Indian mythology in the current generation. The book, being the first of the Shiva Trilogy, gave a fresh perspective on the various deities of our mythology. The author intended to make gods as normal human beings, made of flesh and blood, who rose to a divine state only through their karma. The books sparked a rise in the interest in Indian mythology among Indians and became a milestone in Indian literature. Other works include the Ramayana Series, a multi-part series, comprehensively covering the story of Ram, written by Ashok Banker., These books remain to be of significance in the present day version of the Ramayana.

Other works have sprung up as well, changing the way we view Indian Mythology. The Hindi TV show, Devon ke dev, Mahadev, inspired by the works of Devdutt Pattanaik, has created a massive impact on the Indian public with its extensive story on the time of Shiva. In it, we see various episodes and stories that took place in the life of Shiva. The show has garnered a lot of attention and applause and still remains to be a benchmark story in the history of mythology in Indian TV.

Another interesting TV Show is by none other than the famous Devdutt Pattanaik himself. His show, Devlok with Devdutt Pattanaik talks about various stories in Indian Mythology as he helps decode these with simple words, peeling the complexity only to reveal the simplicity of the underlying meaning. This not only helped people understand the tales of lore but also helped them implement their beliefs effectively.

Our generation is leaning more toward hero worshipping our gods rather than taking the meaning behind the mythology and leading a life by it. Youngsters today base their own versions of heroes on the hulking figures of Hanuman or Raavan or the strikingly handsome figures of Shiva or Rama. Our rituals and prayers have become more of what they are, just rituals. One may argue that the bhav or the emotion and intention behind our religious practices is somewhat lacking, and it is more out of fear that we continue to do so.

A fear of being an outcast in a society that has worshipped these gods diligently over the past few millennia. And out of the ashes of these fears, rise atheists who begin to question the existence of the very same deities we’ve been praying to. They label themselves as socially progressive. To bridge the gap, it is our collective effort to decode the layers of our scriptures, so as to gain a better understanding of what is primarily our birthright, since the dawn of mankind.

As a socially progressive person, and as a reader of this article, do you think it is better to shed what has been the ultimate inheritance from our ancestors or to bridge the gap between the simplistic stories of our lore and the complex symbolism behind it?

Related posts:
Crowdfunding To Save Indian Languages - A Remedy For The Loss Of Mother Tongues
[VoxSpace Selects] #PrayForNesamani – The Vadivelu Meme Storms The Internet
VoxTalks With Sanjay Manaktala - The Global Desi Pioneer Of Stand Up Comedy In India