[VoxSpace Life] The Karma Effect : Is The Concept Of ‘Greater Good’ Actually Good? 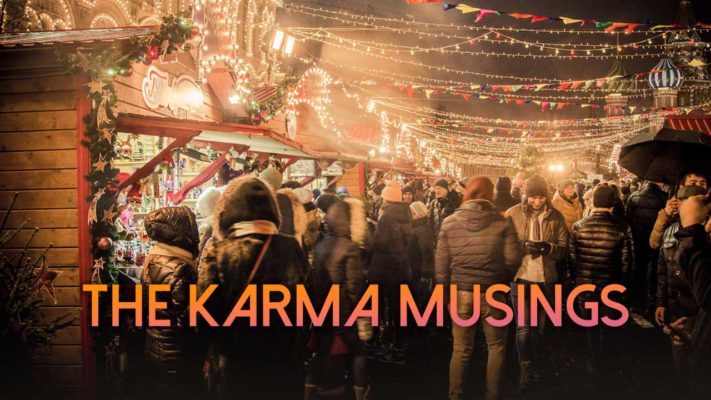 I first encountered the term and concept of “Greater Good” as a young reader of the Harry Potter series. And as the plot unfolded it was obvious that Greater Good was the pretty painted motive, that powerful and selfish individuals, with a messiah complex, accompanied by a certain pseudo-intellectual and inept “foresight”, use to justify their actions. It was apparent to me that this moral line based on the conceptualisation of a mathematical equation (the sum of all happiness achieved is greater than the pain caused = morally right) is evil from the core. And it wasn’t until recently that I was familiarised again with this ideology and the grey areas between the supposed dichotomy of ‘Good and Evil’ became evident to me.

And as simple as it sounds, it makes this philosophy a no-brainer, it is obvious that given a choice one would choose pleasure over pain. For instance, if you could choose to kill 25 soldiers in order to prevent a war, you would choose that, as the pain and suffering caused by war and its other economic effects are definitely more catastrophic than the pain caused by the loss of 25 soldiers.

Another often cited moral dilemma is the Trolley Problem, this problem provides a situation where a trolley is speeding down a track on which 5 people are standing and you have a choice to switch the track but that would kill one person on the second track. A very obvious choice here is to switch the track as the pain caused by the death of one person is lesser than the death of five people.

But what if the 5 people are 2-12-year-olds and on the other track is a well celebrated medical professional who claims he can cure cancer or if it is Elon Musk? And so the later thoughts sought to answer such questions of Quantity vs. Quality of happiness, situational morals, the burden on choice maker etc.

But none of these “ethical rules” is – even as much as Immanuel Kant might have liked it – universally accepted, as the feelings of pain and pleasure vary drastically with individuals and so do the things and acts that are associated with them over places and times.

Apparent Evils Of The Greater Good And even with the little hiccups, Greater Good as a moral dictator seems like a fair path. But the apprehension that I began the article with still remains, which was predicted by the character’s motives. (SPOILER ALERT!!) The two wizards sought to uproot a “Statute of Secrecy”, that kept the magical folk in hiding; their identity and the existence of magical powers a secret from the non-magical humans or muggles. By doing so, they believed that it would liberate the Magical society and by establishing control, the muggles will find better and stronger leaders.

This, they believed was the Greater Good to achieve, for which they would have to use their powers and fight those who opposed. And the very discernable problems present here were the absence of other ethics which condemn the subjugation of less powerful, lack of proper judgement, and sense of entitlement along with the assumption of power and authority, that made them think they had a right to do so. Real world examples of the practice of this thought such as Colonisation, the Indian Emergency of 1975, the Hitler Holocaust etc… seem to share the same characteristics.

Then Why Do We Love It So Much?

Despite such horrific incidents, Greater Good is still practised and administered directly or indirectly largely. Most distinguishable examples of its practice are tainted with faulty logic and poor consequence prediction on the administrator’s part- the individual’s part. It is also not a hard point to miss that assumption of power is a necessity for any change to be made. And where future telling is concerned, statistically predictable consequences at their best are still only that- statistically predictable. And so the wisest thing here is to draw the line between an ideology’s manifestation and the ideology per se.

It is rather unnoticeable that the conceptualisation of this philosophical thought is one of the major building blocks and guideways to the current modern society. The existence of the military or any defence force, parental techniques, your workout routine, vaccines, innovations and research requiring many resources, the entire justice system, investment decisions, every single revolution that ever occurred, even the Christian belief of God sacrificing his son for humans’ sins.

Greater Good always poses a risk. A risk that we must take for the sake of evolution. A burden of the gift of decision making is that we have to use it. And horrendously outrageous imbecilic decision making must not stop us from taking decisions ever. And it will be for the greater good if you were to make a wise one.