[VoxSpace Review] Dhadak : A Glossy Upgrade To A Gritty Tale 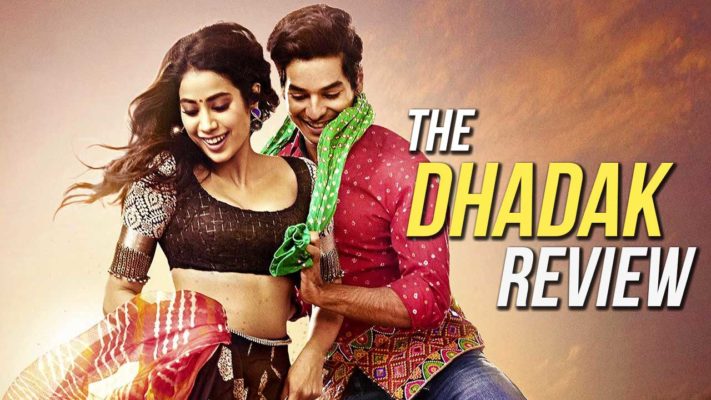 A Glossy Upgrade To A Gritty Tale

Let me first confess by saying that, I was not looking forward to watching Dhadak because it felt to me like I was going to witness a nepotistic extravaganza that was a remake of a truly organic classic. The original Sairat was an intensely political caste-based epic romance that swept you of your feet and then just smacked your face on the floor with that brutal yet realistic second half. I still cannot get that gut punch of an ending out of my head. But, this movie surprised me because even though it had all the trademarks of ruining the classic, the director made sure that he does not totally destroy the essence of the original.

More Of An Adaptation Than A Remake

As it turns out the director knew what he was working with and how to adapt the story of the original to the tastes of a more dharmafied crowd. He takes the earnest romance of the first and makes it more of a fantastical romance you would expect out of a production like this. He strikes the perfect balance between the grounded indie feeling of Sairat and a Karan Johar production. I was still not ready to go with it even 10 minutes into the film, but slowly I just got swept away by the Bollywood magic that he somehow weaved into the film. You might ask, doesn’t that kill the magic of the original film? But, my answer to that is that you still have the original for that. If he tried to do that, he would be competing with the original and that would be a mistake. I see this as a more of a companion piece to the original than an exact remake.

The lead pair has a really good chemistry and they play their respective parts really well. Jhanvi Kapoor as the assertive yet vulnerable Parthavi has a kind of magic in her eyes that can hold anyone’s attention for long enough to fall in love with her. When it comes to her acting, this is a fine debut; she falters a bit when it comes to her crying scenes, but I could look past that purely due to her charisma in the other parts. Ishan Khatter as the innocent yet strong-willed Madhukar is the stand out here. He is captivating to look at throughout the film, there isn’t a misstep in his performance. The rest of the cast is really the problem with the film, they are so typecast that it gets really boring after some time because there is no mystery left anymore regarding what kind of people they end up being. Also, the friends of the lead, that were so great in the first, are almost like an afterthought here.

The Major Difference Between Sairat And Dhadak

When it comes to the look of the film, this is where the most drastic difference between the two movies become extremely apparent. The director chooses to change the location of the film from the gritty bittergaon and the dirty slums of Hyderabad to the more picturesque Udaipur and the sanitized hostels of Kolkata. This inadvertently becomes positive and negative, because, on one hand, it makes the movie easy on the eyes, but on the other, it detaches us from the pain that the couple needs to go through for us to relate to their struggle. For example, when you see the slums of Hyderabad in the original, you can almost smell the streets and feel how uncomfortable Archi feels. But, in Dhadak, the room in which Parthavi has to stay looked like my dorm in college or even better than my dorm. This reduces the stakes of the film to the point where you feel like they are over-reacting and that shouldn’t be the case. I am not saying that this kills the film, but it would have if the actors were not as magnetic as they were.

With brief changes to the music, it almost stays the same, which is a good choice because the original soundtrack was too good to tamper with. I really enjoyed revisiting all those songs in a slightly different setting. The visuals are very well staged for the songs and the budget really shows in how beautiful every moment looks. The editing is really crisp and seamless. The costumes are beautiful and add to the eye-candy that films so wants to give you. The production design, though prettified, is really well done.

Finally, I have to say I was surprised by my reaction to the film and would highly recommend it to anyone who hasn’t seen the original. And to those who have, try to not keep those expectations in your mind, because Dhadak is not aiming to be Sairat. It is merely trying to emulate the feeling of Sairat in a more sanitised sense for a different audience. To my shock, I almost teared up once or twice in the film and that deserves an endorsement from my end. Go watch this movie if you are not looking for anything light and palatable to the whole family, or for a date night. And if you are looking for something deep, why haven’t you watched Sairat yet??