Indian cinema is never void of love stories. It is one topic of liking which never grows old or gets boring for the filmmakers to try their talent on.  The filmmakers, in fact, love to inject a forced love story even in a contrasting genre like a thriller or an action flick to give it a “rosy” touch. Romantic songs with soulful lyrics are something which gets better and innovative in every emerging film.  This means that love stories definitely have a special adoration and liking by the Indian audience!

The various aspects of love stories were greatly explored by our filmmakers. Let it be a mutually liked relationship, obsessive love, materialistic love,  childhood love, love between the couple, love between divorced, love between old people as well! Thanks to versatile filmmakers like Upendra, the psychotic phase of love was also explored well in depth by the directors!

TFI And Its Love For Melodrama

But in the majority, the love stories are meant to have some vivid emotions which often go melodramatic and emotional –especially in Telugu film industry. The formulaic idea of “happy endings” and “fairy tales” would never go out of fashion and there is are ample Telugu flicks where the story goes like this.

A middle-class young guy (often getting complaints at home for being irresponsible) falls for a well-off and stunningly pretty girl (surrounded by less good looking friends) and tries every way (including singing) to woo her. After a few interactions, the girl is bound to fall for the guy and they become a couple.

The challenges begin when the prospect of marriage comes and the girl’s father arranges for an alliance (often played by a foolish and gullible guy who has no brain of his) and the rest of the story is about how the guy wins over his lady love with his tactics.  And yeah, there will be a foolish antagonist who makes futile attempts to get to the hero.

Sounds familiar? Of course, it does. Well, at times the girl might be poor and the guy might be rich but many love stories of Telugu films follow the same pattern. In most of these cases, the scenarios and conversations are quite away from realistic happenings.

There are absolutely no flaws in either of the lead pair and they act only as per the script (instead of their thought processes or individuality).  The ideal romantic date for this couple would be partying at an exotic location like a beach, foreign land where everything is extremely flawless (so perfect that it hurts our eyes!).

But, Here Is The Catch!

However, there are exceptions like Geethanjali, which had the lead pair suffering from a terminal disease, yet finding out a purpose in each other. But compared to the ratio of commercial love stories, these films fall short in number.

But when did we actually see a couple who understands what life is, the limitations, and at the same time get the most out of what’s present in the hands?  Isn’t life all about the simple pleasures like finding bliss in the existing moment? Can a couple have a perfect date even at home, when the power goes off and while eating home cooked food? Instead of an expensive ride in a car or a bike, can a couple find eternal solace even in a laid-back late-night walk?

A recent Tamil film named 96- starring the towering lead pair Vijay Sethupathi and Trisha have become the buzz, not just in the home ground, but all over South India. Right from the word go, this film not only takes a dig over a love story, but also on nostalgia, slowing down in life, and experiencing each other’s presence flawlessly and wholeheartedly.

The beautiful aspect of “what if?” has become a great centre point in this film and brings a great angle to love stories in films.  The film has so many layers, where the aspects of wishful thinking go hand in hand with the contrasting reality of the lead characters.

What makes 96 stand out compared to previously released love stories in South Indian Cinema? The story is simply quite straightforward. Two high school lovers Ram (Vijay Sethupathi), a travel photographer and Janaki (Trisha) meet after 22 years of estrangement, at a school reunion.  The aspect of situations in life and how brilliantly they shape up our lives is greatly shown in the film.

By school love, it doesn’t mean there is the obvious aspect of “puppy love” or sweet nothings between the lead pair. There is no unnecessary display of affection, buying expensive gifts, or physical intimacy between them. It is only the beautiful admiration of the hero towards the singing talent of the female lead, which is such a great relief to watch.

Most importantly, there is no vulgar display of force by either of the lead actors to get the love or insist a certain kind of behaviour from the other. This incredibly shows that respect is the highest prerequisite for two people to be in love.

The newbie director Prem Kumar handled the love story so well that it flows effortlessly from one scene to the other. When the young school going couple gets separated due to some unknown reasons, there is no excess tears or sadness by the lead pair. They do feel bad but eventually move on with life.

After 22 years of separation, Ram is busy in his own life as a travel photographer and a teacher – searching for the higher purpose of life. Janaki, however, is happily married and blessed with a daughter as well.  What exactly happens when these two 37-year-olds meet and what emotional graph they might have gone through? – that itself has to be watched on the big screen.

When The Lead Pair Is “Normal” Like The Audience

The conversations between Ram and Janaki are quite effortlessly written with no-sugar-added. They first share a great friendship together and the genuine concern for each other is clearly seen in every interaction. Another amazing aspect of the film is how Maestro Ilaiyaraaja’s songs were used in the story narration- whenever the female lead is shown.

Incidentally, the female lead’s full name is S Janaki (which is also the name of playback singer who sang most of Ilaiyaraaja’s earlier songs). Can it get any more beautiful? When words fail to express, it is always some song in a film or a musical, which is exactly apt to the situation we are in- 96 proves this fact breathtakingly.  It would be a sin to exactly mention what scene from the film depicts this fact. 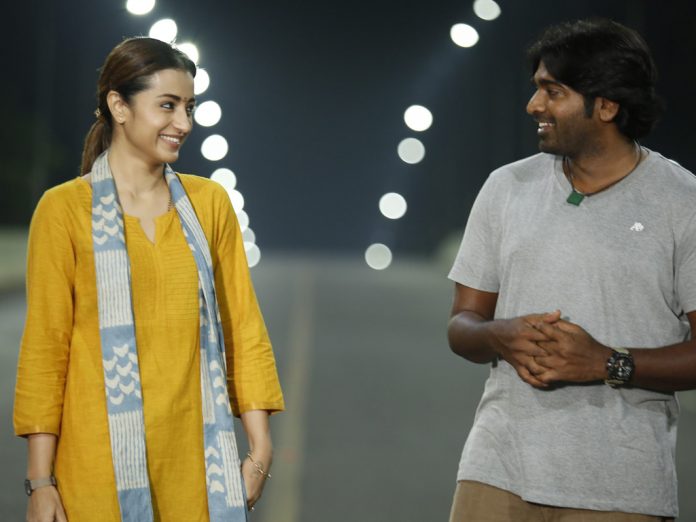 Apart from the love story, it is incredible to see the number of aspects which this film touches. The nostalgia of the 90s decade, the pureness of school friendships, sharing the fun conversations with the school watchman and what not?

The film points out the important generation difference between the older school kids to the current generation, where technology rules the roost. We even start thinking about whether technology has spoiled our relationships, which are confined to WhatsApp communication or public display of affection in social media now!

Our own Tollywood’s experimental hero Nani watched this film and apparently broke down to tears by the end of it. He was so impressed by the film that he wants to remake it in Telugu now!

But when I see it, instead of a frame by frame remake, isn’t it high time for our filmmakers to explore better nuances of love- in different points of view? Our creativity is not at a dearth. Young filmmakers need to gear up by getting inspired from such films- instead of instantly jumping for a remake!

Some observations and changes which can come in Love Stories of Telugu Flicks (These are purely personal opinions which may/may not strike a chord with all!)

Coming Of Age The TFI

Many Telugu film buffs might disagree with me saying that even Tamil and Malayalam cinema has their own share of commercial and no-mind love stories. While I agree to it, the zeal for experimentation is definitely more in the neighbouring film industries than in ours.

When I was watching 96, the only thing which propped in my mind was,” Are Telugu people incapable of making such films?” – of course, we are capable. Films like Pelli Choopulu, C/o Kancharapalem prove this fact greatly. But we need such breakthrough in commercial cinema as well.