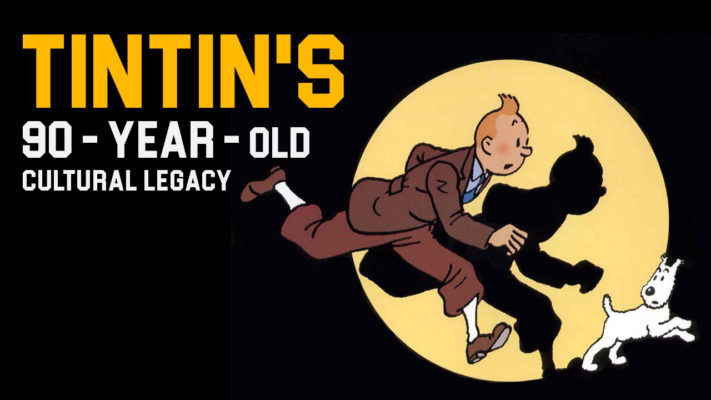 Back in 1929, Tintin was a globetrotting newspaper reporter and adventurer, born in war-ravaged Belgium recuperating from high unemployment and fascist political regime. As 2019 marked the 90th birthday of Tintin and his fox terrier Snowy, Hergé basks in all his glories as the proud father of Tintin. The Tintin saga is overwhelmingly more than the colourful countryscape, it is also about the feeling of belongingness and cultural integrity that have made Tintin worthy of serious re-readings. Fashioned after the Ligne Claire or Clear Line style, the school of Tintin breathed life into Ted Benoit’s Ray Bana, recreating the Blake & Mortimer Series later on.

Tintin was always meant to be commercially successful, primarily because, it was meant for a newspaper publication (Le Vingtieme Siecle) where Hergé worked in the subscription department. Since newspaper comic strips purposefully maintain a continuity, Hergé perhaps never had the liberty to experiment much with Tintin, either as an illustrator or as a graphic designer.

A Desk Job With A Globetrotter’s Mind- Origin Of Tintin

As per old journal records, Hergé’s comics appeared in a small space, sandwiched between war news, stock market updates and the sports column. Practically, Tintin fed on the lack of lack of children’s entertainment during the early 20th century, offering a brief respite from late afternoon radio programs and operas.

For Georges Remi aka Hergé, it was about survival. To increasing the dwindling readership of his paper, rather than creating a legacy that would outlast his mortal existence. Hergé was from a lower-middle class family, with an ordinary childhood.

Cigars of the Pharaoh and The blue Lotus

He had to denounce goofy idealistic ventures, carry on with a desk job, and design comic strips according to the demands of the Catholic newspaper that Le Vingtieme Siecle was. In the end, he remained the artist, who blossomed a galaxy of characters around Tintin, picturesque settings, and swashbuckling twists to last for nine decades.

Unlike Charles Schulz of Peanuts, which made weekly appearances in a number of newspapers, Tintin never died with Hergé. A pornographic parody of Tintin made a cameo, two decades ago by a Belgian cartoonist who wanted to improvise on Tintin. De Duve who infused it with crimson elements like Professor Calculus indulging in brothels and Tintin calling on gay clubs, was later arrested. It might be seen as a fan’s zealous distortion of common themes that run through the Tintin series- honour, love, friendship, and heroic feats.

What Tintin Meant For Us?

India’s romantic alliance with Tintin can be traced back to Satyajit Ray’s confession of his undying love for Tintin. In another instance, Aveek Sarkar, the owner of Anandamela, a children’s magazine, fondly remembers the time he travelled to Brussels to personally ask for translation rights from Hergé. As regional languages kept on publishing Tintin in Tibet, with Tintin waltzing through crowded bazaars, we, the Tintin fandom in the country, never had to suffer Tintin’s unexpected demise like Chacha Chaudhary or Vikram Betaal.

Tintin in Tibet HD | The Adventures of Tintin

Tintin’s publication in regional languages also abolished linguistic barriers, from rural India to suburbs, The Adventures of Tintin was for all. The symphony that produced such wide geopolitical milieux, is continuously being revived today. One of the sketches produced by Indian artist Mahafuj Ali, shows Tintin with Professor Calculus and Bianca Castafiore among the others, clad in Bengali attires. It brings about the authorial presence of Hergé, as each character vibrates with Hergé’s pratfall comedy and exuberant humour.

Around The World Through Hergé’s Eyes

In an interview with the British journalist Gavin Scott in 1977, Hergé explicitly mentions Tintin’s political credentials as anti-Bolshevik probably for the first time. In each and every instalment of Tintin, we get an authentic socio-political picture albeit coupled with stereotypes and offensive caricatures.

With Destination Moon, Hergé took a giant leap by hurling our boy hero towards the moon even before Kennedy could  announce Americans’ bivouac on the moon, which was done 11 years later. This odyssey through space is not merely a thriller for the first time readers but is a poignant reminder of the stupidity involved in narrowing down the universe.

Explorers On The Moon part 1| The Adventures Of Tintin

From a reader’s perspective, Tintin’s blend of the prosaic and visual art heightens the journey of this reporter, storyteller and the vagrant boy in baggy trousers, bereft of family or origin. He remains our solitary genius, called upon to resemble all, repudiating every cultural barrier.

90 years later, Tintin remains as a wholesome combination of detective drama, heroic exploits, space odyssey, and a travel journal. We, the readers, would always love to believe that Tintin liked to play the role of a truant at his job. After all, in the entire collection, he is seen writing just one article!

Tintin- To Strive, To Seek And Not To Yield

Tintin’s popularity on paper has been challenged a number of times, subjugated by Asterix,  Adventures of Phoebe Zeit-Geit and Zap Comix. But Tintin lives on forever, expanding his horizon, drinking life to the lees.

Hergé’s scope was limited, he could not afford the travelling life of Ulysses, yet he could give us a beautiful collage of cultures via Tintin, Tintin in Congo, Tintin in the Land of Soviets and Cigars of the Pharaoh. As any Tintin fan would put it, here’s to the boy who traipsed countries, moon and million hearts!