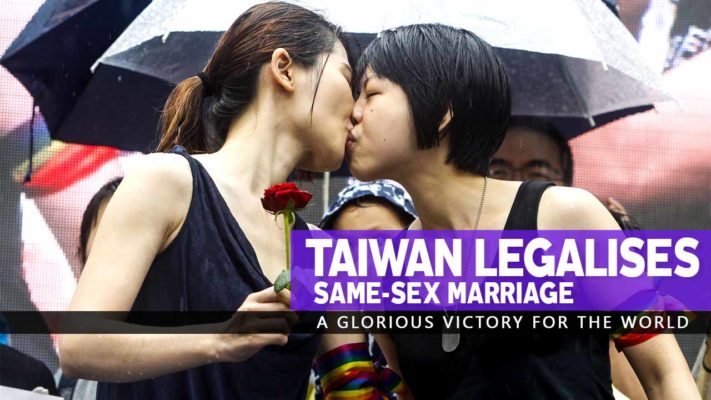 A Historic Win For Human Rights In Asia

May 17, 2019, is the historic day on which same-sex marriage was legalized in Taiwan. This is the first country in Asia that has legalized marriage between couples of the same gender. The law was passed by the government just before Taiwan’s code on the barring of same-sex marriage would have been automatically dropped by the Taiwanese high court. Lawmakers had faced pressure from both the LGBT groups demanding changes within the country and from the religious groups who were opposing such changes. But in the end, the law was passed with the votes being 66 – 27. This law allows couples many of the tax, insurance and child custody benefits which are made available to male-female marriages.

May 24, 2017, was the day that the Taiwanese high court ruled that marriage between same-sex couples is in violation of the Taiwanese constitution. The court later gave the legislature 2 years to make a law legalizing same-sex marriage or have it become legalized automatically. There was a lot of opposition faced while trying to make same-sex marriage legal. In 2018, the public even voted to deny same-sex couples the right to get married.

The Role Of DPP

Taiwan’s ruling Democratic Progressive Party (DPP) worked for years to pass a bill to benefit same-sex couples. Despite tireless efforts, it was thwarted due to strong opposition.  Activists have been criticizing the ruling party for failing to pass this legislation sooner. Now that the law has passed this could be very beneficial for DPP as well as its head President Tsai Ing-Wen.

“Today is a proud day for Taiwan,” said president Tsai Ing-wen on Friday, during her visit to the southern municipal city of Tainan. “It is the day Taiwan let the world see the goodness and value of this land. Everyone’s love is equal.”

What Needs To Be Done Next

Jennifer Lu, The chief coordinator of the rights group Marriage Equality Coalition Taiwan had this to say about the law, “I’m very surprised – but also very happy. It’s a very important moment in my life,” to the BBC. “However, it’s still not full marriage rights; we still need to fight for co-adoption rights, and we are not sure about the foreigner and Taiwanese marriage, and also gender equality education.” She continued with, “It’s a very important moment, but we are going to keep on fighting. We are Taiwanese and we want this important value for our country, for our future”.

We have to remember that Taiwan is first to make a move in legalizing Same-sex marriage in Asia. These types of changes need to be done on a bigger scale throughout Asia. It is important for us to become a continent that cares about its people. India has seen its ups and downs with regards to laws on same-sex couples. We need to take a look at Taiwan and further ourselves. While same-sex couples are not illegal anymore in India, we still have a long way to go. The state at which we are right now is not at all a reflection of the inclusion that India embodies.