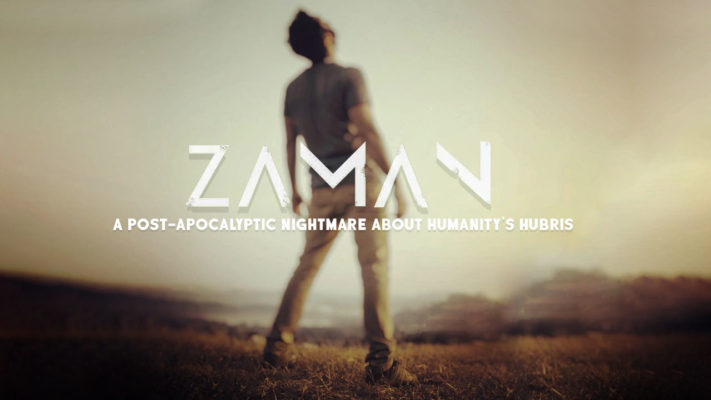 With the advent of social media, making films has become a lot easier and also helped in removing the middlemen. Crowdfunding, as most of us know, helps film-makers bring out their vision to life, without being bogged down by the financial constraints associated with film making which often is the case. Additionally, it is a way for people to directly get involved in shaping something beautiful collectively.One such successful venture is the story of Zaman, by Athul Prabhakaran which achieved its fruition through fueladream.com.

Zaman follows the story of Tawhid in a post-apocalyptic world where most of humanity is eradicated, due to a chemical mishap. Through the course of the film, we see Tawhid scavenge through the wasteland in search of other humans, while trying to find his own humanity. Tawhid in this journey is accompanied by Anne, an ex-colleague of his and a young hitchhiker they find on the way. The movie aesthetically reminded me of films like The Rover and Mad Max, while thematically it reminded me of films like I Am Legend and Soylent Green.

There are many impressive things about this film. Technically, the film is top-notch. The cinematography uses mainly shallow lenses and occasionally switches it up to create a claustrophobic atmosphere of sorts. The director and productions designer cleverly use negative space in the frame to indicate the desolate nature of the world they live in. The editing of the film finds a very hypnotic rhythm to hold the audience’s attention and put you in his shoes. Due to the protagonist having episodes of schizophrenia, the editing in those sequences was really impressive.

The music was top-notch and the SFX work was pretty great too. My only contention with the film was that it could have been paced slightly better, so as to not lose the audience’s attention. Another minor gripe would be, as an audience, I would’ve wanted to know more about the disease. But, I can chalk it up to budget constraints.

ZAMAN (2019) from Athul Prabhakaran on Vimeo.

Overall a great attempt by Athul Prabhakaran and team. Hope to see a lot more independent film-makers going out there and making films on their own terms.