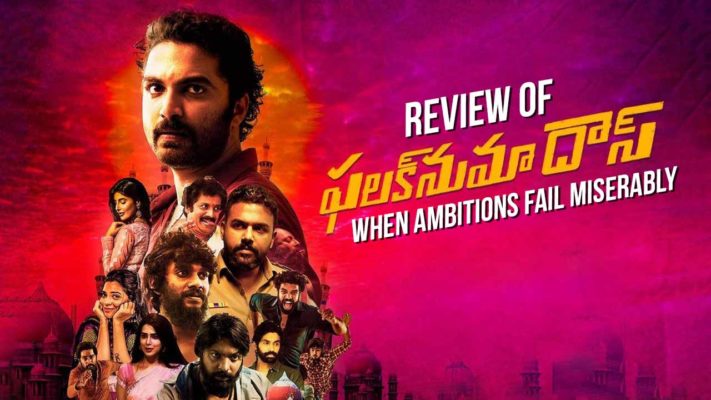 My Thoughts As I Walked Into The Theatre

Just to give a timeline of my feelings towards this movie, I was very apprehensive when the movie was announced as a remake of the Malayalam masterpiece Angamaly Diaries. In a brief period of time, the teaser came and I was surprised by how good it looked. That was the first time I found out that Vishwak Sen himself was directing. I had previously liked him a lot in Ee Nagaraniki Emaindi. The trailer came out and I was a convert by then. I was totally rooting for the film. I felt like he found a way to infuse enough of a Hyderabadi nativity into the film. It sounded and felt very lived in and tangible. I booked my tickets early and went to the Thursday show. The theatre was packed and the audience was even more excited. They were chanting the lines from the trailer before the movie even started. I knew I was in for a blast and then the movie happened.

The movie follows the original’s plots, characters, their quirks, and dialogue pretty closely. As in, most of the scenes are even shot and performed in a similar manner. The problem is that there is so much added to the already crowded and packed story, by extending the runtime. This leads to long stretches in the film, where there isn’t much plot progression. One of the main differences that threw me off from the beginning was the focus of the film. While Angamaly Diaries was about a time and a place, this was about a dude in a time and a place. That was pretty evident with the title itself, but the thing is my optimism made me overlook it.

When the film is intensely focussed on one character, he needs to be more layered and interesting than just an angry dude. This I feel comes from how over-stretched Vishwak Sen must have been to direct, write and act in a film, this early in his career. It is an opinion and not a statement, that maybe it would have helped if the work was delegated a little more, allowing him to concentrate a bit more on any one thing. Every film needs to have a point or an idea to present. I don’t mean it in the sense of a message, I do not want it to be preachy in any way. I just would hope that it would have some kind of perspective on the events that transpire in the film, and this film lacks that.

Another problem with the film is the tone of the film. One second, it is this Yash Raj type dance number which is slickly shot with artificial looking sets and the next, it’s people cursing at each other in these long naturalistic gritty scenes, shot in real locations. The shifting tones, kind of throws you off not knowing what to feel. They just don’t seem to feel like they belong to the same film. While there are great long shots, which are even awe-inspiring sometimes, they are bogged down by the self-indulgent nature of the rest of the film. All in all, I do respect the effort put into the look of the film, I just hope that it could’ve been more consistent.

Coming to the performances of the film, it is still a mixed bag. Vishwak Sen is not bad, but he is still playing someone very similar to the guy from Ee Nagaraniki Emaindi with a thicker Hyderabadi accent. The two guys who played Raju and Ravi were pretty well cast and they did their part and so did Uttej as Peg Paandu. Getting Tharun Bhascker to play B.T.Saidulu is a genius bit of casting and he shines as this brash but good-hearted and honest cop. But, the biggest problem is the casting of the female leads. None of them seem convincing in the roles they play and the dialogue with them seems very forced, which leads me to feel nothing for them or their romance. Every time it cut to them, I was waiting for it to be over and go back to the main plot.

Music Is Good, But…

The music by Vivek Sagar is objectively great, some of their placements make them tedious. All the songs are beautifully composed and the vocals are just out of this world. Especially the theme music for the antagonist was brilliant. The way these montages are edited elevate the music a whole lot. But and there is a but. The sound design is just not up to par. The Foley effects seem very artificial and sometimes even fake. Also, the lip sync is way off in a lot of scenes, which again takes you out of the film.

Any film rises or falls on how it wraps up the film. Angamaly diaries excels at this, in the way they pull of that masterful tracking while never losing the grip on the narrative or the performances. When it comes to Falaknuma Das, they try to pull off the same, but it just does not work. The camera seems way too intrusive and mechanical, the crowd keeps staring at the camera, the performances seem very artificial and the final moment seems just unbelievable. There is also this very bad cut or zoom in at the halfway point in the shot, which is just totally absurd and takes you out of the film. This is the one thing that really hurt the film, while most of the other problems could be overlooked. If it does not stick the landing properly, that too when aiming so high, it is just tragic.

All in all, Falaknuma Das works in moments but fails to hold your attention as a whole. It is still a worthy attempt and I hope he does not stop and gets better at his craft. Please do watch it, if you are planning to. Because on principle I believe we should support independent cinema and it is still way more interesting and ambitious than the normal mainstream fare that we get every week.