VoxTalks With Sucharita Tyagi : ‘You Become A Film Critic, Because You Love Movies’ 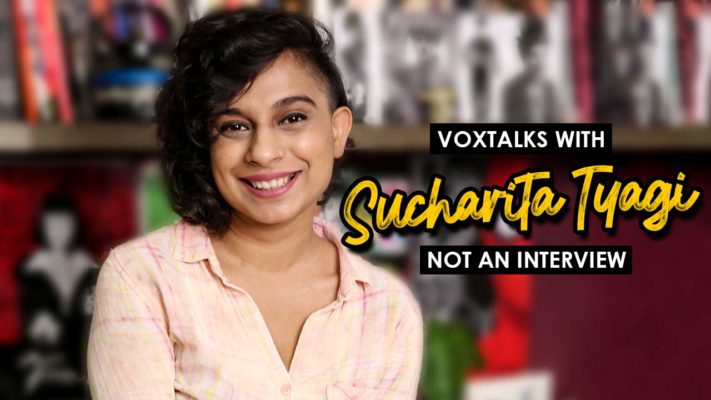 The Woman Behind, “Not A Movie Review”.

Sucharita Tyagi is a celebrated RJ and film critic associated with Film Companion. Her weekly movie review show which is available on YouTube as “Not A Movie review” is an all-round package for any movie enthusiast. It is funny with a very clear perspective. It is also filled with valuable insights into the film that can help one take an informed decision to watch the film. Her show brings fresh perspectives to film appreciation as well. She managed to give us some time from her busy schedule to talk to us about her journey thus far, her process of decoding films and much more. Here are a few excerpts from that conversation:

From watching ‘Jurassic Park’ when you were 5-6 years old to presently doing ‘Not a Movie Review’, how has your overall journey been, say in understanding and perhaps appreciating cinema?

I still watch films to enjoy them. The way you look at the world changes as you grow up, as everybody’s changes. You develop a personality and a perspective towards things and the same way towards cinema. That affects the way I watch movies, but I still go to watch movies to have a good time. Even now that I am watching it in a more professional capacity, my hope is only to appreciate it. Even though I might not have liked the promotional material, I still try to keep an open mind as I walk into the theatre. There is a difference in my knowledge towards cinema which could affect my opinion, but not the intent. There are some films which I enjoyed as a kid which I might not enjoy anymore because of the messaging in the films being outdated. For example, Hum Apke Hain Kaun is the first film I saw in the theatres, I still have very clear memories of it. But it is something I can’t enjoy anymore, but other than that I still hold the same fondness for cinema that I have always had.

Since you are not a conventional movie critic or like you say, you are not a movie reviewer, we are curious to know how you measure the worth of a movie. What makes a film click for you?

I do believe I am as conventional as anyone in regard to critiquing a film. I would say there are different styles of film appreciation. My style stems from my personality and who I am as a person which would be the same for any critic. At the end of the day, any film review is the opinion of the individual and reflects slightly of who that person is also. Mine reflects a little bit more because I do it on video. The person that I am is what you see on the video, its not some different character that I created. It might sound a little bit more fun and stuff because I put the extra effort to make that way. Anything that is more fun is more accessible and will reach more people. But, if you listen, I am talking about the film with as much detail as anyone else, it’s just that the casual nature of the video could throw you off.

Now that we are on the topic, we’d like to know a bit about the process involved in making an episode of ‘Not A Movie Review’? It also seems that there is a lot of improvisation from your side while shooting, isn’t it?

There is no improvisation involved really. Everything is scripted. After watching a film, I take about two to three hours, usually on Friday morning. Usually, I get to watch them on a Thursday, but if I miss it, I might need to watch it on Friday morning. So, after watching the film, I note down all the points that I want to talk about. I structure that into a script, pepper it with some jokes. The edit is fully taken care of by the Film Companion edit team. It’s a very young team, a fun team. I write the script also in a style that it is supposed to be edited and I give it to them too. We have got into a very good rhythm which makes the whole process very smooth. If I must talk about improvisation, I might add a word or two, but that’s it. 99 percent of it scripted.

You are someone who openly (read semi-subtly) calls out a movie as good or bad, no matter how big a star is involved in the movie. Now, does that put you in a fix when you get to meet and interact with these actors, specifically if you’ve bashed a movie?

No, not really. As I don’t really host any of the interviews or panels at Film Companion. Such situations don’t arise for me anymore. I don’t meet them anymore in a professional capacity. But if you spend as many years as I do in the media field, you tend to develop relationships with people. They do good films, they do bad films, but that does not affect my equation with them. And if you are asking whether that would affect my reviews in any way. My answer would be an absolute no.

There has been a shift in Hindi cinema now wherein the audience is accepting more content-based stories like Andhadhun, Stree and Gully boy being the latest one. But we still see that the big production houses are somewhat skeptical to invest in content-driven movies when compared to big-budget superstar driven movies. What are your thoughts on this situation? And do you think that this could change?

If you are asking about my opinion, I hold cinema to very high standards. I want to love every film I watch; I walk into the theatre with that intention. If it does not meet those standards, I am going to do the same to any movie.  You only talk about something passionately, negative or positive, only if you feel passionate about it. The movies you mentioned are great and we need more of them.

You were very vocal about your criticism towards Kabir Singh and Uri. On that topic how much of an impact do you think cinema has on culture in general? And would you have any apprehension in critiquing films in the same manner in the future.?

It’s not as black and white as that. Cinema does have a lot of impact on culture in general. So, I really think about, what I am saying. I am like that with every film I watch. It’s like the old saying,” cross my heart and hope to die”, Ha-ha. See, I appreciate the platform that I have been given and I appreciate that people listen to my opinion. I have to be very careful about what I am saying in general, not just these films. A movie is not just something, that produced on a whim, by a couple of people. A lot of people put a lot of money and effort to make it happen. But I don’t really take the response that comes to film review, because that must be my opinion and I can’t cloud that. If they are going to troll me for a film review, I can’t let that be a factor in judgment. I don’t really worry about, “Log Kya Kahenge” and stuff like that.

Nowadays, people are inclining towards web series as well. But we don’t have critics talking much about them. Do you think we could have the critics’ fraternity critique them as well soon? What do you personally feel about the web series culture?

No, I don’t think so. Because to watch a web series, you need to take out a lot of time. It’s not like I am not reviewing them because I don’t want to, I would be happy to. Like once I had watched stranger things and I spoke about it on my Instagram. I like to do that occasionally, but as of now, I don’t really have the time. Having said that, I enjoy watching them. Whenever I get the time, I watch an episode here and there. It just takes a lot more time to finish this way than if I were to review them, that’s all. I just finished watching Mindhunter season 1 now, and I am still trying to catch up on a lot more amazing content out there.

Usually, when people want to take a break from work and relax, they go to watch movies, but in your case, watching movies is part of your work. So how do you unwind yourself?

And what are the five TV or web shows that you would recommend anyone?

I don’t know what the top recommendations would be that I need to give, but these are the ones that are on top of my mind.

Keep up the great work Ms. Tyagi. Hoping to see a lot more insightful and interesting opinions from you about in the future. Thank you for your time.