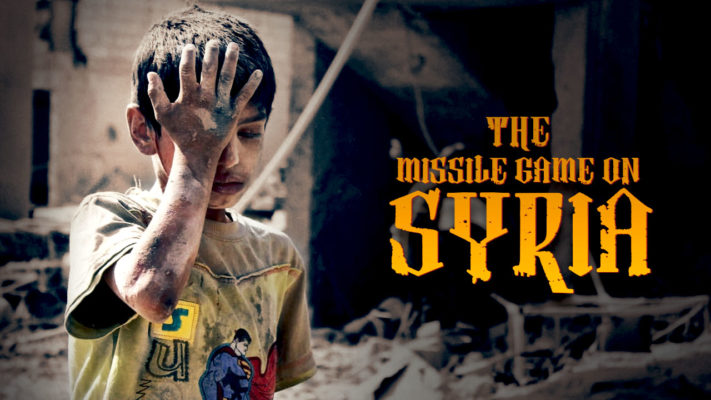 On The Chemical Attacks And Retaliatory Missile Strike

The Syrian Government has been accused of launching chemical weapons strike over Anti-Assad forces in which around 40 deaths have been reported, which consists of civilians. Disturbing images of Syrian children soaked in chemicals and suffocating due to it have appeared on the internet. The Syrian government outrightly denied any wrongdoing on its part while the Russians have termed it as a staged attack. The situation in Syria is so volatile that its nearly impossible for independent media to survive and report from there. The western media which provides the bulk of the information in Syria to the international community has completely ignored the arguments given by governments of Syria and Russia. The forces of US, Britain and France launched a coordinated missile attack on Syria despite risks of its escalation into a full-fledged war. The Russian Defence Ministry had issued prior warnings of striking at the western missiles as well as their launch sites if needed.

The Complications Of Syrian War

Syria has spiralled itself into a never-ending cycle of violence and agony. The country is fragmented into numerous segments out of which Russia and Iran, which supports the Syrian government, anti-government forces backed by US and western countries, and the ISIS are the main players. ISIS, which was growing into a menace a few years back has been significantly neutralized. The direct military intervention by Iran and Russia managed to turn the tide in the favour of Syrian President Bashar-al-Assad, who wrestled almost 90% of Syrian territory back from the hands of Anti-government rebels and ISIS. The campaign of the USA and its allies have however landed on a wrong footing with its influence in the region waning day by day. This factor is believed to have prompted the announcement of Trump to consider pulling off its forces from Middle East/West Asia. Israel, which has historically been locked into conflicts with almost all its neighbours, is seeing the rise in influence of Iran in Syria as a negative development for its interests. It is said to have launched a barrage of missiles at Syrian forces recently, which was unequivocally condemned by Iran and Russia. Israel has repeatedly pursued the US and its allies to directly intervene in Syria.

Crumbling Of The American Imperialist Empire

The leadership position of US under President Donald Trump has repeatedly come under the scanner internationally. The hurried step of bombing Syria also points towards the fact that it was an act of saving face by the Trump administration. President Trump has been mired in numerous controversies and has found it increasingly difficult to smoothly run the White House. Its decision to engage in tariff war with China was followed by an international collapse of stock exchanges. US government’s unilateral move to pull out of the Paris Climate change agreement has been criticised by all its major allies. The Trump administration has repeatedly asked its allies to not be over-dependent on it for their security and to bear out necessary costs to protect their military interests. Even after this recent coordinated attack on Syria, the US diplomats were prompt to point out that it was a one-off incident and in no way signalled continued US military intervention in Syria.

The Implications Of USA’s Adventurism In The Past And Present

The missile attack has in no way left any influence on the ground scenario of Syria. It is one of the acts of muscle flexing, which the US often resorts to in order to further its interests. History is a testimony to the manner in which the US attacked Iraq, blaming it for stacking chemical weapons. Later no chemical weapons were found in Iraq and the prime motive of removing Saddam Hussein from power was achieved by the US. This act of military aggression is one of the largest factor contributing to the growth of ISIS and subsequent destabilization of the region. Russia, which is facing the brunt of Western economic sanctions, has made it a point to stand its ground in Syria. Its unabated support for Assad has been the single largest factor responsible for the elimination of ISIS. The tall claims of combating ISIS has proved to be nothing more than rhetorics on part of the US. Due to the questioned nature of US intervention in Middle East/ West Asia a major NATO ally, Turkey, has also aligned itself with Iran and Russia in order to broker peace in Syria. The Syrian refugee crisis is one of the largest humanitarian crisis of our times. The need of the hour is to quickly settle down the flames of war which has been imposed on the Syrian citizens against their will. Any attempt by the US and its allies to destabilize the Syrian government under Assad will further prolong the misery of war and exodus in the already volatile region.