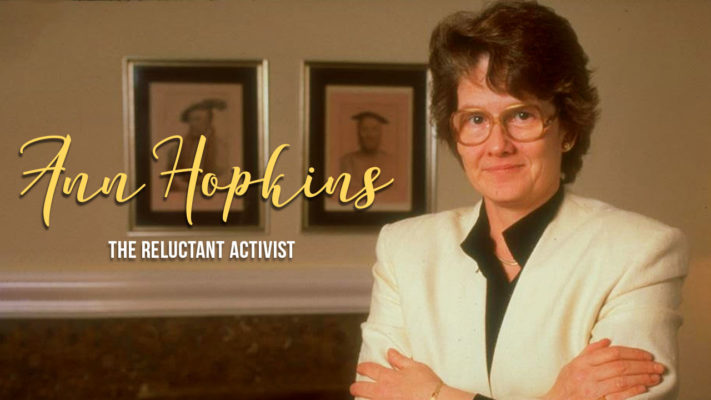 Gloria Steinem writes “a feminist is anyone who recognizes the equality and full humanity of women and men”-a sentence of tremendous virtue and importance notwithstanding the subverted and extremists ideologies that have come to dominate in the sphere. Decades later, Steinem, a straight white feminist,  would talk about in a press conference, the first-ever report to be officially filed on “sexual harassment” filed by three black women, in 1975. Around a decade later, something similar would be confronted by a white woman on the same soil, United States, by Ann Hopkins. We have for decades talked and ruminated on the disparity between black feminism and white feminism, however, this intriguing thread is here to remind us of the horrors of social evil circling around gender conformity that women and men alike carry on their shoulders. The three black women need our remembrance as we talk about Hopkin’s legacy in this article and her fight for justice, Paulette Barnes, Diane Williams and Mechelle Vinson.

Your Stereotyping Is A Subtle Act Of Discriminating

Ann Hopkins had challenged the unimpeded and blatant stereotyping that she has suffered at her workplace, Price Waterhouse when her superiors eliminated her from partnership deal complaining of her gender non-conformity. She was accused of bearing male traits like being “aggressive”, her reluctance to put on make-up and her somewhat “macho” air that she carried about her confidently. It was 1982, and we are talking about a western country, whatever followed would go down the annals of history to shape her life and public image. The furore started when her male colleagues complained about her lack of femininity and reached its apotheosis when the next year she was completely eliminated from the partnership proposal, violating Title VII of the Civil Rights Act of 1964. Her victory conferred upon such glaring standardizing the felony of discrimination following which she continued working at Price Water, won her partnership until she retired in 2002.

The lady with zero tolerance and an excellent baker of pies was a sharp answer to gender polarization that is not rare in workplaces or other such state institutions. Sandra Lipsitz Bem in her book The Lenses of Gender writes about the horrid reality when somebody experiences scanning of their self through others’ eyes. The sheer fact that Hopkins was pigeonholed for her virile behaviour in spite of being a talented and hardworking senior manager is a very threat to women empowerment, giving rise to an environment where women are consciously beguiled to keep subservient to the men, but however not before compartmentalizing them to a set of accepted norms and regularities. Closer to home, our media and mainstream cinema ritually exhibit admiration for such conformities, industries amassing huge profits moulding people’s identity using the matrix of socially constructed gender roles.

Ann Hopkins in her battle against this parochial outlook towards women has also voted for a more equal society, where, as Gloria Steinem would opine, men should be taught the values of diligence and empathy which would later prove handy in workplaces. The menace that polarization can give birth to is well chronicled in Hopkins’ struggle to gain her rightful share in the partnership. Hopkins was a rebel in her own ways, a lady who would never be tamed by the gender “perspectives” that society had prepared for her, the woman who was overbearing as her role demanded and held to her seniority without using her husband’s last name. Her daughter, Tela Gallagher Mathias informed about acute sensory peripheral neuronopathy that Hopkins was suffering from, a medical condition that includes permanent numbness and organ dysfunction. Hopkins had laid out in precise language for the generations to come after her, how gender polarization makes the non-conformer appear deformed and problematic, as was the scenario with Mrs Hopkins. It created a hostile and violent society within Price Waterhouse that made Hopkins resign albeit for a short while.

The Idea Of Gender Conformation Is Schismatic

She was aged 74 when she died, a woman who has lived and fought for her strongly held values, and principles that would carve for her countrymen a better society to breathe in, and not simply co-exist. Ms Mathias remembers her mother to be a strong believer in diversity, who did not flinch from riding on a motorcycle for an interview at Touche Ross. Her memoir “So Ordered: Making Partner the Hard Way” reads the year as 1974 when the U.S was at its peak of second-wave feminism; it is a period that sternly questioned the presence of segregation and inequality in the workplace. Ann Hopkins, throughout her life, had questioned the invisible power that works at shaping gender roles, verging on idiocy. Hopkins throughout her life, never for once, paraded herself as a civil rights leader but for thousands of her followers, she is the woman who raised a storm against a multimillion-dollar firm, keeping at stake her own position and career. Sitting on the fence was never Ann Hopkins’ technique and her every move was fashioned to prove that. Ms Mathias fondly remembers the lessons that she has ingrained within herself from her mother “…when you walk into a room, you should walk in as if you owned it.”

Her Battle Is Not Over Yet

Extremely little is known of Ann Hopkins’ personal life, or her childhood except for the basics like she had a stint in IBM and Touche Ross before she joined Price Waterhouse and I wonder if it was she who meticulously stayed away from press conferences. She has been a witness to changing times, shifting political scenarios, where more women, transgenders and men would speak up for their rights. The “macho” woman with broad shoulders had continued her activism in a period when social media was yet to spread its grip when she could have hardly received worldwide support for her cause or when she could have publicly slandered the company with the brilliant usage of hashtags. She has her integrity and a “tough-mind” as she had always believed about herself in the days succeeding her court victory. She, who would later casually smirk at advice like “walk and talk more femininely” is sure to inspire many, generation after generation.