[VoxSpace Selects] From ‘Trapped’ To ‘Pihu’: Bollywood’s Experiments With The Human Instincts

In the last few years, Bollywood has begun to bring real changes in their cinematic form, transforming the old game into the real deal. Bollywood has shifted its agenda from meaningless casual entertainment to a path where thankfully and undisputedly ‘content is the king’. By content, I mean, a cinematic experience that doesn’t make the audience feel like fools for having bought the tickets. One of the recent trends that Bollywood has started, within what can be called its resurrected life, is the survival stories or the stories that put the human spirit to the test. Two films that leave their mark on this territory are undoubtedly Vikramaditya Motwane’s ‘Trapped’ and the freshly released, Vinod Kapri’s ‘Pihu’.

Both the films borderline on the genre of a social thriller by putting to test the instincts and the spirits of their solo characters. This is done by placing them in challenging situations, more specifically, by entrapping them to their terrible fates.

However, the question remains– are these experimental films the breath of fresh air that Bollywood needed or do they have nothing to offer at the end,  of being able to keep up with the expectations of the new age audience demanding an all-rounder script, direction and performance?

‘Trapped’ and the Claustrophobic Fear

Imagine being stuck in a vacant high rise building without electricity, water or food, with a mobile phone whose battery is dead –no one knows that you are trapped and you have no way to get out. The fear is real and absorbing. Vikramaditya Motwane’s ‘Trapped’ plays on a premise similar to this and it is undoubtedly riveting.

Shaurya, the character played by the superiorly talented Rajkumar Rao, gets wheedled into an apartment that is unfinished and uninhabited. His hopes for a future with his girl, played by Geetanjali Thapa, gets shattered when the apartment door slams on his face, with the only key being stuck on the wrong side of the door.

Shaurya is trapped in a vacant high rise building with no basic survival amenities, with no one to help him. It is not unknown that many films on similar premises have been made into Hollywood. The biggest example would be Danny Boyle’s vexing ‘127 Hours’ where a mountaineer gets stuck in a canyon.

Motwane’s script tries to do the same, going beyond the previously presented scripts of Bollywood- that were meant for casual entertainment. ‘Trapped’ is a tribute to the human spirit that is indomitable and resilient to fear and pain.

Vinod Kapri’s ‘Pihu’ is the frightening tale of a little girl that can bring you down to your knees with fear. The movie shows Pihu (played by Myra Vishwakarma), a little girl of two, waking up to a motionless mother in bed and a missing father, on the morning following her birthday celebration. Pihu finds herself stuck in a house that is in mess and in circumstances, that one would never want a child in even in their worst nightmares.

What adheres to Kapri’s major achievement with respect to this film is that he has not failed to realize the drama essential to the flow of the events to which Pihu is cinematically attached, and does not unnecessarily try to overstress it synthetically.

Furthermore, Yogesh Jaini does an excellent job with the cinematography, in playing along with the lines of the vision of director Kapri –monitoring and trailing the child silently without making an effort to artificially induce a sense of eeriness, that is supernatural and stereotypical to the thriller scares of the past.

In fact, to say the least, the camera feels absolutely natural and not at all manipulative in the way it lays eyes on the child or on the prone body of her mother, that is vital to the sensitivity of the film. However, the film suffers from what can be called ‘continuity issues’.

Kapri should have realized that the audience might not be that indulgent in order to excuse and overlook the inexplicable transition of the child from being in a mess with her food and make up covered face and her blackened soles of the feet, to say, a much cleaner and clearer face and feet. In short, the condition in which the child is found later on in the film stays within no boundaries of logic.

‘Trapped’ and ‘Pihu’, the Solo Acts of Survival

Like most films on human survival instincts, both Motwane and Kapri’s films place their solo protagonists under extremely challenging and extraordinary situations. However, the films, although greatly depending on the scripts and the directions, place their trusts mostly and solely on the solo performance of the actors –Rajkumar Rao and Myra Vishwakarma respectively.

‘Trapped’ brings out the powerful sides of the actor Rajkumar Rao, capable of baring himself out to that which is critical to the plot of the film and pointing out the general truth. Probably that is what makes him so influential as an actor. Rao is successful as an actor in exploiting to the complete strength of what is available to him –a minimal set up –in order to express the helplessness and the resilience of the character of Shaurya, journeying through a plethora of experiences of suffocation, exasperation and despair with little fragments of hope and humor scattered in between.

However, with no fault of Rao howsoever, it can be said there are gaps in his performance, probably by an order of direction, that doesn’t let him do justice to what he is capable of doing as an actor and as a performer, keeping the audience confused and baffled at certain points of the film.

Talking about ‘Pihu’ and the performance of the incredible little star of the show, Myra Vishwakarma, while there are certain unfair distractions in what can be called an otherwise exhilarating tale, Myra Vishwakarma as Pihu is the most mesmerizing part of the film.

She is a surprise, forcing the audience to wonder if it is an act of performance or if she is being just her own natural self. In this context, Vinod Kapri is worthy of praise for the style of direction that he has adopted in directing Myra, without unnecessarily overstating her cuteness.

It is impossible to not be absorbed in her character, from the time the camera lays its eyes on her. The audience smiles at her frolics, is taken aback at her knack for inventiveness and is enamoured by Myra’s spontaneous responses to her confusions and dilemmas; praising the director’s ability to be able to naturally capture all of it, while also tightening up at the thought of the harm coming in her way, paralyzed with the constant fear for Pihu.

The Inherent Sadism or the Implied Realism?

While all of the above discussion emphasizes on how Bollywood has straightened its path towards salvation finally after an era of the dead box office, the underlying question is what is the dominant undertone of these freshly discovered strategies of ‘Survival Stories’ –Is it realism or is it sadism?

Both the films work at revealing some of the social realities of the present, from under the cover of two tales that keep the audience squirming in their seats.  ‘Trapped’ enables us to take a fresh look at the hackneyed things of our lives that we take for granted –even simple things like pav bhaji and hateful journeys like travelling amidst sweaty stinky bodies in a packed up local ride seems like something you could long for, when the life itself is fading out minute by minute.

Hell, who would have thought that one could miss the hyper-stressed out office life! But, most importantly, ‘Trapped’ points a finger at the biggest reality –the other face of the massive urbanized society, where lives are invisible, undetectable and lost amidst crowds and where one finds their own voice drowned in the sea of noises leaving one alone and vulnerable in the flux of humanity.

On similar grounds, ‘Pihu’ is taken beyond its conventional reaches as well, when the director comments on social fronts. However, in that the film doesn’t do really well as it stumbles and falters while trying to comment on domestic violence, the careless casual attitudes of the neighbours and of course, the irresponsible and selfish attitudes of parents toward children.

Kapri’s endeavour at making the undertone of social problems profound and evident in the film makes it rather less worthy for having rather inefficiently handled the problem of domestic violence in the film without the essentially required empathy. 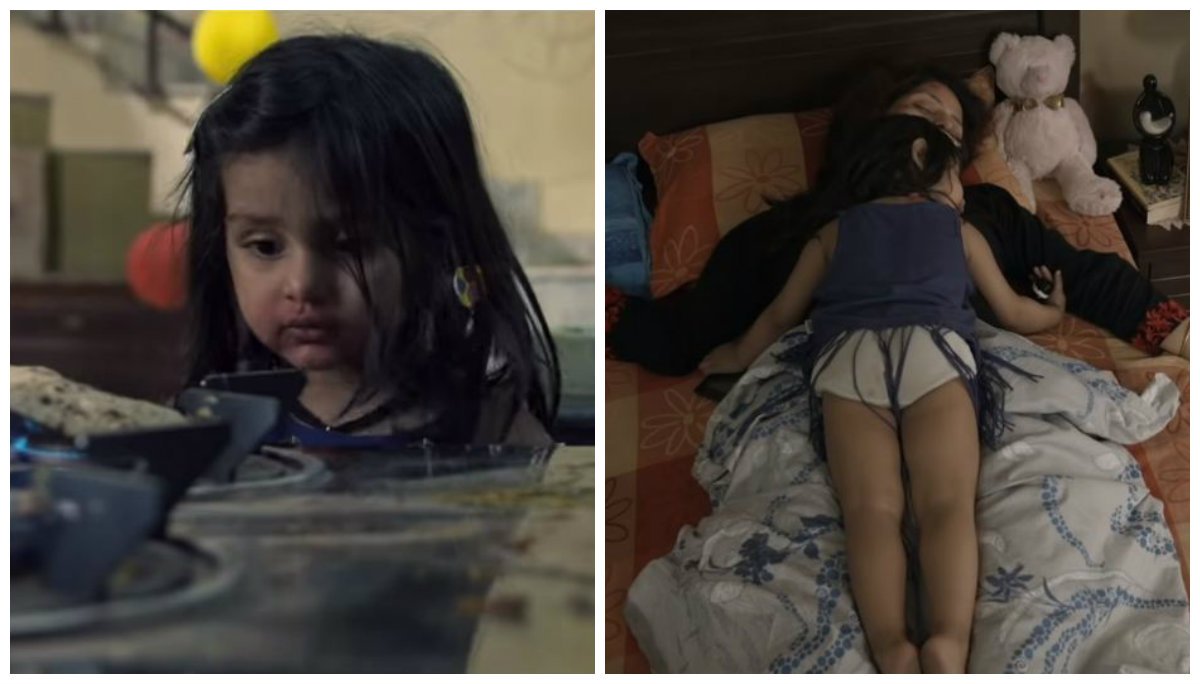 While commenting on social fronts, it is important to note that both the films are extremely sadistic. Although, looking at Shaurya gives you a rather cathartic experience through the act of sadism, ‘Pihu’ goes to the extent of intolerable sadism that is not just sick, but excruciatingly torturous for the audience. ‘Pihu’ is Kapri’s version of ‘Home Alone’ without any touch of the farcical comedy, but an overtly extended form of sadistic manipulation of the audience where a little child is placed in the death’s way, to intentionally manoeuvre the audience into feeling scared.

In short, ‘Pihu’ would probably have done better as a short film. It is a pointless way of torturing the audience for ninety minutes and more, into witnessing a helpless and despaired child in danger at every step of the film. ‘Pihu’ is every audience’s nightmare.