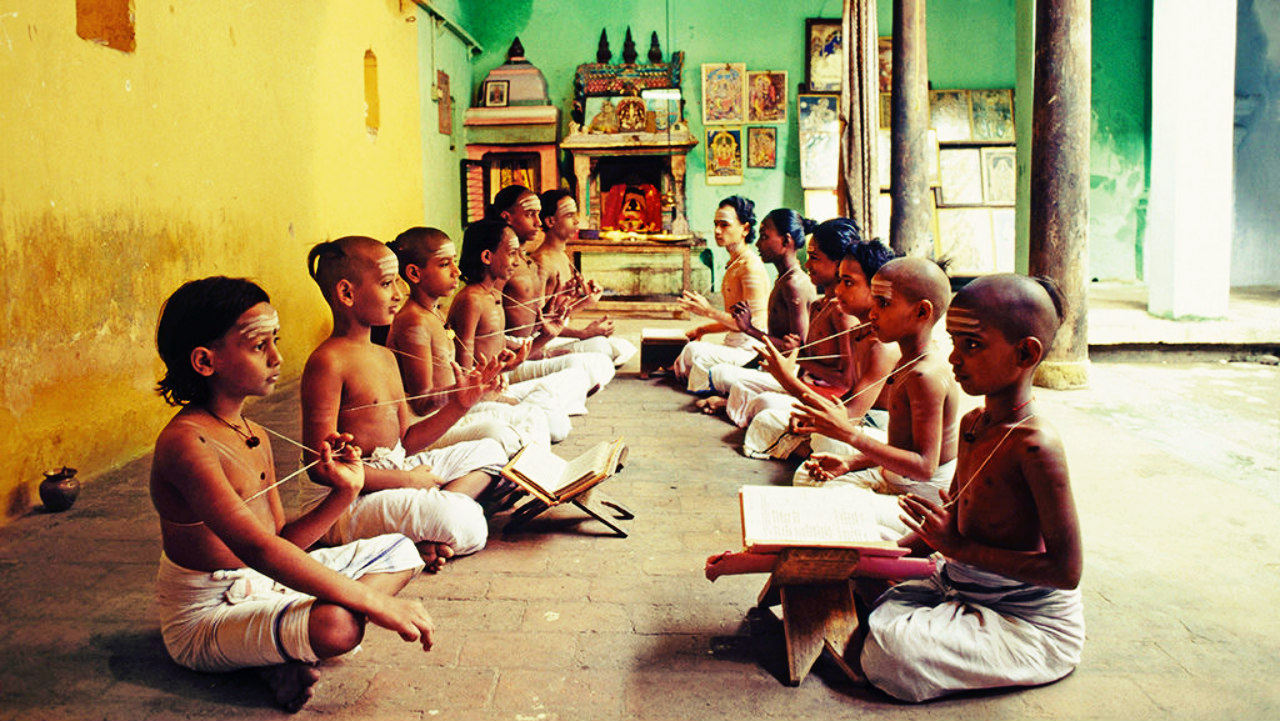 Arguably the oldest language that humanity ever used, remains to be Sanskrit. Over the epochs and evolution, the intricately decorated language, Sanskrit has withered away from usage. At the turn of the century, offshoots in the form of Devanagari, and influence mixes in the form of Persian and Urdu came to the fore. However, Sanskrit still breathed its existence through invaluable scripts and scrolls over the centuries past. A lost tongue, Sanskrit has however found it’s patrons in the Vedic village of Mattur. A village like no other, Mattur have been safeguarding the language and also the essence of Vedas over time and continue to do so to this day. Protector of legacies, the village of Mattur tucked away in the verdant Shimoga district of Karnataka, has ensured that the past remains to seep into the present with their day to day practices.

When one sets foot in this village, one is welcomed by phrases like “Bhavatha nam kim (What is your name?)” or Katham asti(How are you?) and Coffee va chaayam kim ichchhathi bhavan (What will you have, coffee or tea?) in eloquent and poetic sounding Sanskrit. Such is the culture of this village, where children are taught Vedas and scriptures as soon as they attain the age of 10. The language of communication in the village is purely Sanskrit (allthough at times for the convenience of people visiting they also converse in Kannada). According to a track back by a local newspaper, this tradition of Sanskrit owes its roots to Sanskrit Bharati, an organization which started propagating the language in the village of Mattur, many decades earlier. The village has since adopted Sanskrit as its native language.

The desolate village is populated by Sankethis, an ancient Brahmin community that had migrated from Kerala and settled down in Mattur about 600 years ago. Although Sanskrit remains their colloquial tongue, the earlier generation would converse in what was called as Sankethi. Sankethi was a mix of Tamil, Telugu, Kannada and some parts Telugu. What’s interesting to note is that Sankethi has no script and has to depend on Devanagari for it. Their vedic influence is also apparent in the way the village of Mattur is constructed. The entire village of Mattur is built as a square, like a typical agraharam, with a central temple and a village pathshala. The Vedas are chanted at the pathshala in the traditional way. The students learn them meticulously in their five-year course, under the careful supervision of village elders.

The students at the pathshala also collect old Sanskrit palm leaves, expand the script on computers and rewrite the damaged text in present day Sanskrit to make it available to the common man in the form of publications. Another interesting sight is Sanskrit graffiti on the walls of the houses in Mattur. The slogans painted on the walls are ancient quotes such as Maarge swachchataya virajate, grame sujanaha virajante (Cleanliness is as important for a road as good people are for the village). Some families also have the sign “You can speak Sanskrit in this house” proudly written on their doors. Mattur and its sister village, Hosahalli, are also known for their efforts to support the ancient tradition of gamaka, a unique form of singing and storytelling in Karnataka.

What is more intriguing is that Mattur, is a central repository of Sanskrit written Knowledge pods. One can arrive here to learn Sanskrit, which will be taught by renowned Sanskrit scholars, within a period of 20 days. Their commendable effort will go a long way towards keeping the knowledge of this ancient and scientific language alive in the years to come. On your next trip to Karnataka, be sure to drop in at this culturally vibrant village of Mattur, and relive the glory days of ancient Indian civilizations.