[VoxSpace Life] Why One December The Circus Stopped Coming To Town 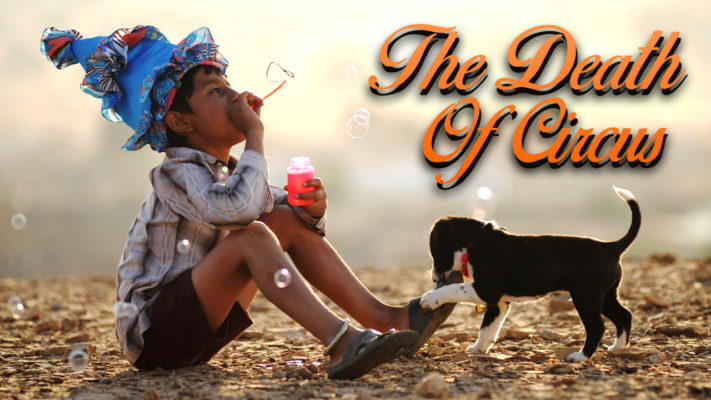 One of the things that are constantly on my checklist is what my next generation will miss out on. A very unlikely thought for a millennial but then again, if we as custodians of our present don’t take the effort to talk about the things that we were lucky to witness, then, perhaps, our future generation is going to be poorer for it. I would very much like to believe that I am leaving behind a time capsule in the form of an online letter, which someone, five years later, will stumble upon and his/her eyes will glisten with excitement.  I am an old fool, and I sincerely hope that those, who are reading this now, are the ones too; that even in the loss I may find a kindred spirit.

If you look back into your childhood; yes, when having a colour television in a household was a matter of pride, when people didn’t have smartphones in their hands and life was simpler, you will remember the anticipation in your heart, when it was winter; because, making time between Christmas and New Year a spectacle was in town. I don’t know if your memory serves you well, but let me regale you the time when the circus came to town.

We would know, well ahead a week of the performance that something was going on. My father, a usually reticent man would come home with a pamphlet that would gaudily read that the great XYZ circus will have a show from so and so date and we should prepare ourselves for a spectacle that we haven’t seen before or will ever see! As children, we were never allowed to go to movies, because coming from an orthodox household, sitting huddled beside people watching a heroine gyrate through motions was not something the family approved of. Yes, the 90s was not known for path-breaking commercial cinemas. So, the only outing that we were allowed was on a single day in December when we decked up in our finest and holding our father’s hands made way to the “maidan” or the festival grounds, where the circus had set up a tent.

It was a lavish affair; set over three acres of land you had majestic tents and huge boards. Each board carefully hand painted (another losing art) showing the enthralling performances that were present inside. There were images of the daring trio! The flying gymnasts! The man that had the strength of an elephant! The fire-eater and the list went on. And once you enter the biggest tent, you would have been captivated for two hours. For a measly sum, you could witness miracles, one after the other! But you had to hold your breath! Once the times of tame mortals were done then entered the real deal – the animals of the circus! A chimpanzee that does trapeze! An elephant that can juggle balls! And a lion that runs through hoops of fire. My little heart didn’t know what animal cruelty was and nor did the million bulbs, that shone in the tent, allow us the insight to see the pain in the eyes of those animals. So, to me, it was an experience of a lifetime.

What The Hell Happened ?

The circus died slowly during my teen years. What happened to it was at one end justified and at the other end, just sad. The Indian government banned the circus performance of the animals, which was a welcome move; however, our government, regardless of the regime, has always had a penchant towards short-sightedness. Although it levied a ban, it kept the future of the animals, who have been with the circus for years, hanging. These are animals that have been kept in captivity for so long that set them back in the wild was a terrible idea. The exotic ones were shipped to zoos, where they didn’t have to perform but at the same time, fell into the same laconic care that others are used to. A better fate morally; but the practicality of the entire charade was questionable. Then again, who bothers about animals in India, a country that has failed its human citizens repeatedly.

Not getting into a moral debate here. Let’s go back to the story. The circus history says that it was born out of a challenge. In 1880, when a circus owner William Chireney challenged Maharaja Bale Saheb of Kanmdwad’s stable-keep Vishnupant Vinayak Chatre to prove whether or not he was capable enough to train the horses better than Chireney himself;  Chatre didn’t just win the challenge; he went on to create India’s first successful circus.

The Death Was Slow And Painful

In the golden days, more than 300 circuses spread across India employed more than 50,000 people. Motley of artists and workers brought together a spectacle that would send the audience gasping.  The ban on animals didn’t only weaken the circus; it also took away their biggest draw while, at the turn of the tide, they were battling with television. Armed with just humans, the circus didn’t have much chance. People were not interested anymore in watching talented artists defying gravity or brushing aside death in the giant pit while driving motorcycles at a breakneck speed. A fully fleshed out circus needs at least Rs 80,000 per day to run a show. With the footfall slowly falling and people slowly forgetting about them; it became very hard for the circuses to keep the gates open. So, many started calling it quits.

There is an Indian Circus Federation (ICF) and an INTUC- affiliated Indian Circus Employees Union, however; there are more figureheads rather than robust bodies that would battle it out for the circus. In 2010, a Kerala Circus Academy was opened in Chirakkuni, situated in the suburbs of Thalassery. By 2016, it shut off its doors due to lack of funds, management and students.

My next generation will not be able to see Indian circuses; they will hear about it in old man’s tales, in newspaper clippings, in old footages and wonder what actually went on there. Those, searching for an answer, will find this article, maybe They will find a small remembrance of the past and the answer to “Why one December, the circus stopped coming to the town?”