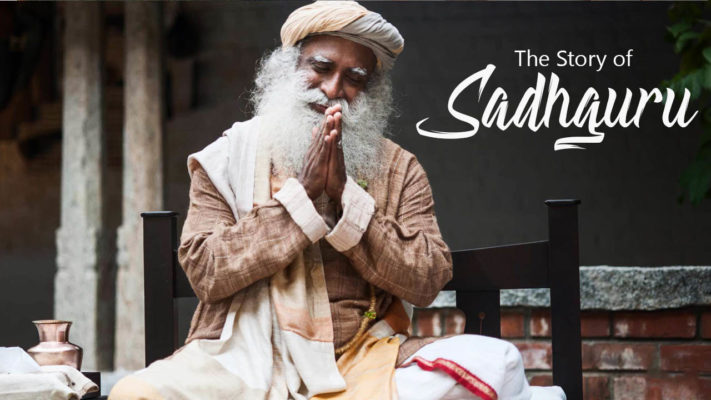 Sadhguru, also known as Jaggi Vasudev, is a famous Indian yoga guru and mystic who founded the Isha Foundation, an organization which organizes yoga programs around the world. Alongside being a spiritual guru he is also a motivational speaker, an author, and a philanthropist. Born to an ophthalmologist who worked in the Railways on a transferable post, he cultured his love for travel, adventure and urge to explore places unknown at a very young age. In his childhood, he would often wander into the forests near his home and spend days there. As a result, he planted the seed of love towards snakes and reptiles in his heart at a very tender age. Aside from reptiles, he also loved motorbikes and riding them to places.

He was a fun-loving, bright young man who blossomed into a successful businessman. It was, in fact, an encounter with the spirit that made him change his perspective on life.  It was as if he had received his higher calling and it told him that he was meant to be a yoga teacher. He went on to found the ISHA Foundation, which became embroiled in various social and communal development activities with time. Sadhguru was awarded the Padma Vibhushan civilian award by the Government of India on 13 April 2017, in recognition of his contribution towards spirituality.

He was born on 3 September 1957 in Mysore, Karnataka, to Susheela and Dr Vasudev. Initially named Jagadish Vasudev, he has one brother and two sisters and is the youngest of them all. He was an active, curious and intelligent child who developed an early love for nature and adventure. He met with Malladihalli Sri Raghavendra Swamiji, a prominent yoga teacher when he was 11 years old. Swamiji taught him a set of simple yoga asanas, which he practised daily without taking a day off. After completing his schooling he attended the University of Mysore and graduated with a bachelor’s degree in English Literature. It was during his college days that he picked up his fascination towards motorbikes and travelled to lots of places with his friends.

His Family, And Wife’s Mahasamadhi

Sadhguru on the surface may be many things people, a guru, mystic, yogi, poet, writer…  a true multi-dimensional being! But he is also a father and a husband. He met his wife Vijaykumari, whom he fondly addressed as Vijji, at a lunch he was invited to in Mysore.  This was followed by a wonderful exchange of love letters, which ended in marriage in 1984, on a Mahashivratri day. In 1990, Sadhguru and Vijji had a daughter, whom they named Radhe. She went to Rishi Valley School for eight years and spent four years at Kalakshetra, learning the ways of dance, and now has become a dancer.

Sadhguru was consecrating the Dhyanalinga in the month of July in 1996. Vijji had decided that she would leave her body once the linga was complete. She had expressed that she would ascend on a full moon day. When persuaded otherwise, she replied, “Right now, my life is perfect, inside of me and outside of me. This is the time for me. I don’t know if another time like this will come for me.”

On that full moon day, Vijji sat meditating with a group of people. Eight minutes later, she left, with a big smile on her face effortlessly. She was at the prime of her health, at thirty-three years of age. It is not easy to leave the body like this without causing any damage to the body. Just walking out of your body like you drop your clothes and go is not an ordinary thing. When a person feels that he has seen everything there is to see and feel everything there is to feel under the heavens, he drops the body and leaves, on his own accord. If there even a hint of struggle or injury, it means suicide. The absence of struggle, which seems like the person just walked out of his body like he walks out of his house without any external factor, is Mahasamadhi.

After completing his college studies, Sadhguru tried his luck in several businesses like poultry farming, brick making, construction, etc. In his mid-twenties, he had turned out to be quite the businessman.

On 23 September 1982, at the age of 25, he rode up Chamundi Hill and sat on a rock, where he claims to have had a spiritual experience. He describes his experience as follows:

“Till that moment in my life, I always thought this is me and that’s somebody else and something else. But for the first time, I did not know which is me and which is not me. Suddenly, what was me was just all over the place. The very rock on which I was sitting, the air that I breathe, the very atmosphere around me, I had just exploded into everything. That sounds like utter insanity. This, I thought it lasted for ten to fifteen minutes but when I came back to my normal consciousness, it was about four-and-a-half-hours I was sitting there, fully conscious, eyes open, but time had just flipped.”

Unable to grasp what had happened to him on that rock, he left his business to his friend and set out to travel in order to shed some light on his mystical experience. And after deep meditation of a year, he decided to share his experience with others through yoga.

Founded near Coimbatore in 1992, the Isha Foundation is a non-profit spiritual organization offering yoga programs. The organization became very popular over the years and today offers yoga programs throughout the world in countries like United States, England, Lebanon, Singapore, Canada, Malaysia, Uganda, China, Nepal, and Australia.

The Isha Foundation is also involved in various social and community development activities. In 2003, it established Action for Rural Rejuvenation (ARR) a multi-phased program aimed towards improving the overall health and quality of life of the rural poor in Tamil Nadu.

The foundation also established the Project Green Hands (PGH) in Tamil Nadu in the year 2004. The aim of the project is to plant 114 million trees throughout Tamil Nadu and increase the forest cover to 33 percent in the state. This Project was awarded the Indira Gandhi Paryavaran Puraskar, by the Government of India in June 2010.

He is an internationally renowned figure and has spoken at the United Nations Millennium World Peace Summit. He also addressed the World Economic Forum in 2006, 2007, 2008 and 2009.

Sadhguru has penned over 100 titles in eight different languages and is a New York Times best-selling author. He is also a talented poet who loves to compose poems in his leisure time.

He was voted among the 100 most powerful Indians for his contribution in the field of environmental protection and for encouraging public participation in ecological issues in 2012.

Related posts:
[VoxSpace Health] The Fuss About The Unique Keto Diet – A Diet Which Allows You To Eat Cheese And Cr...
[VoxSpace Life] Love, Sex, Paedophiles, Rape And A Robot : Welcome To The Future Of Intimacy
Samskara Art Exhibition By Keertika Rajaram Brings The Perfect Fusion Of Painting And Poetry To Life