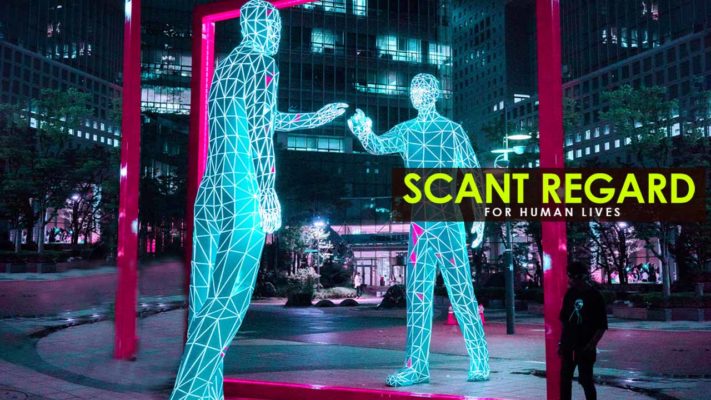 The Callous State Of Affairs In Our Country

In India how often do we come across reports such as ‘a private bus falls into a gorge killing 48 people or a railway bridge collapses killing 100 people?’  The answer is ‘quite often’. Why do we Indians have such scant regard for human lives? Compare this to any European or American country. Even if 5-10 people lose their lives in an unfortunate accident or incidence in these countries, they hold candlelight remembrance marches for the lost souls for years together afterwards. The answer to this nonchalant attitude of Indians lies in their getting immune to such occurrences, as far too many of these happen routinely and frequently in India. We have grown almost callous to such reports. But what can an ordinary Indian do if the whole system has turned apathetic and unapologetic altogether? The safety mechanism required in all spheres of an Indian’s life is almost non-existent.

Whenever a mishap or an accident occurs, our politicians lose no time in coming to the accident site, shedding crocodile tears, announcing ex-gratia payment for the deceased/injured and then comfortably heading home in their air-conditioned cars.  Even the amount of ex-gratia payments declared in such unfortunate incidents has become a contentious issue for the political parties. If the deceased person happens to be from the minority or downtrodden community, a mad scramble starts to happen between the ruling and opposition parties, whereby each tries to outdo the other in terms of paying the ex-gratia amount to the deceased’s immediate family.  There is so much poverty in this country that even under such difficult circumstances the deceased’s family is sometimes forced to up their ante before their potential givers (read political parties/Govt.) for extra compensation. Just imagine a dead body of our loved one lying in our backyard as we fight for more compensation. Even to imagine such a sight is repulsive for most of us, but for others, it’s a stark reality.

Since our political masters have become immune to unfortunate events, they brazenly think that their responsibility towards people ends once they announce a hefty ex-gratia payment for the deceased’s family. We all have come across many such incidents whereby a deceased soldier’s family has shoed away a politician for even hinting to compensate their loss. For the deceased’s immediate family, their whole world topples before their eyes in a jiffy. How can then, anybody even think to compensate for a lost life with money?  A recent incident may be recalled in this context whereby a lady air force pilot rang up her father, just before embarking her last fatal flight, and telling him that she would be flying a ‘sick plane’ shortly.

Several incidents of a mass stampede in holy sites during festivals or important occasions too have also been observed frequently in India, whereby the authorities seemed least bothered about making pre-emptive safety arrangements mandated by such massive gatherings.  The reason for such an apathetic attitude of authorities is simple; they know quite well that a ceremonial enquiry commission would be set up after such fatal stampedes/accidents, which will continue its enquiry for a long time, and then, in the end, would likely absolve everybody involved, by giving them the benefit of doubt.  Immediate payment of ex-gratia by authorities helps to cloud the angry sentiments of victims/victim’s family in such cases.  As for general Indian masses, they feel sorry about such incidents but find themselves to be helpless. Such is the sorry state of human lives in our country.

Why Aren’t The Authorities ‘Safe Than Sorry’?

In all the above-mentioned incidents, had the safety mechanism been in place, loss of so many precious human lives could have been avoided.  Year after year overloaded private buses keep falling into gorges, killing hundreds. But, there is little or no action from the authorities to stop such overloading. The absence of fencing in such hilly terrains adds to the gravity of the situation.  Similar is the condition of many of our railway bridges/other bridges and railway tracks (half of which had been built during the British era) which desperately need to be replaced. Despite the conduct of safety audits for these bridges and tracks by the concerned authorities from time to time, they still keep succumbing and sucking human lives.  Our Soldiers, Pilots and Sailors keep losing their lives due to faulty and aged equipment/carriers, yet we only end up giving lip sympathy to their cause.  There is no safety mechanism in place which can retire such faulty equipment/carriers in time and replace it with new ones.  In case of locations which have a repeated history of cyclones, floods, earthquakes and waterlogging, the safety mechanism deployed by the authorities are dismal, to say the least.  So many lives are lost every year due to these natural catastrophes.  Such catastrophes are common in foreign countries as well, but their safety mechanism ensures that minimum lives are lost due to them.  However, in India, the death toll due to these calamities keeps on rising each year, instead of abating.

How often we must have come across labourers trying to fix those huge billboards while hanging like superman at great heights on temporary scaffoldings with little or no safety mechanism/gear in place.  What we don’t realise is that it is not only their lives which are at stake; it is the lives of their entire family which is at stake as well because they might lose their main breadwinner in case of an eventuality. Such huge billboards are often put in broad daylight right under the noses of both civil and Police authorities. But who cares, as they are menial workers and not VIP’s. Similar is the plight of manhole workers, some of whom died while trying to enter into long unused manholes due to the presence of poisonous gases.  Again they are without any gas masks or safety gear while doing so.  The pitiable work conditions of industrial workers engaged in areas like mining, factory etc have been depicted on our celluloid so many times. Countless such workers lose their lives either due to hazardous work conditions or inadequate safety gears.

Though authorities are supposed to conduct regular inspection of such activities, yet these inspections remain farcical most of the times. The concerned safety inspectors often take hefty bribes to overlook safety mechanisms deployed in these industries and as a result, mishaps happen quite frequently. Lives are regularly lost in such hazardous industries and the entire effort of the administration is to somehow cover up such incidents.  Even when they fail to cover up, they know that media can often be bought into silence later on. As far as relatives of the deceased are concerned, the lure of compensation and at times a job offer for a family member keeps them silent.

There is little or no safety mechanism existing in sectors like beedi making, cracker manufacturing industry etc.  As a result, many workers engaged in such activities contact life-threatening diseases like TB or have fatal injuries.  But money covers it all; the revenue generated by such industries is too dear to our political bosses.  So despite urging us not to indulge with firecrackers or alcohol or smoking through the Govt. advertisements, the authorities themselves do everything possible to maximise the revenue generation out of these industries.

Masses Too Compromise On Their Safety

Youngsters zipping across busy roads on their bikes at breakneck speeds, sometimes with as many as 3-4 pillion riders, are a common sight in many Indian cities and so are people riding their bikes without helmets. Sometimes the parents themselves handover bikes or cars to their teenage kids even if they don’t have proper driving licences.  The result is all too familiar; countless lives are lost on Indian roads every day. Everybody seems to be in a tearing hurry these days; so they carelessly cross the railway tracks or drive their vehicles while talking on their mobile phones. In the absence of proper foot over bridges or zebra crossing in many cities, people try to cross busy roads amidst heavy moving traffic. This has resulted in some many injuries and fatal deaths. Though authorities are to blame for the absence of such infrastructure, yet it is our life which is at stake. So we need to take extra caution while crossing such busy roads, remembering all the way that somebody back home is waiting for us. Safety cannot be compromised under any circumstance. Better late than never.

The Value Of Human Lives In India

Human lives are sacred and we in India give scant regard to it. Safety has ceased to be our priority. Recklessness and lawlessness reign supreme on the Indian milieu. Simply blaming the authorities for the tragic incidences is not enough. The concern for safety should be ingrained in our children’s mind since their learning ages itself.  This only shall give rise to responsible citizens, who are not only about their own safety but about the safety of others as well.  Only responsible citizens make good administrators and only good administrators are able to deliver a safe and secure society to its citizens.