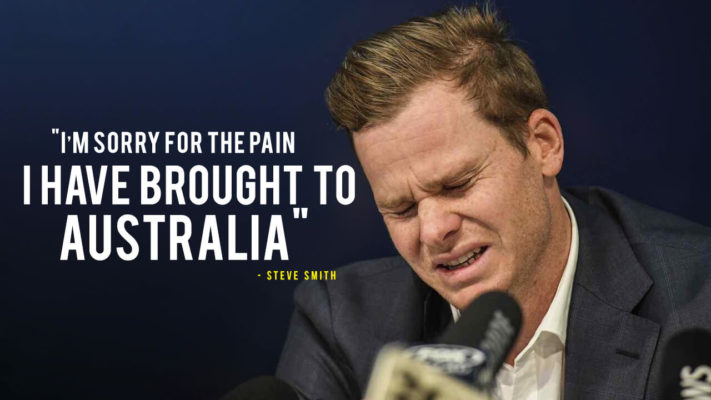 An emotional Steve Smith broke down in tears throughout a five-minute press conference as the former Australia captain spoke of how the ball-tampering scandal has affected his parents.

Smith, who has been banned for 12-months, fronted up to the world’s media at Sydney airport this morning after returning from South Africa in disgrace.  Addressing the media for the first time since he was banned and sent home by Cricket Australia, a very emotional Smith said, “To all of my teammates, to fans of cricket all over the world, and to all Australians who are disappointed and angry, I am sorry.”

He added, “As captain of the Australian cricket team, I take full responsibility. I made a serious error of judgement and I understand the consequences. It was a failure of my leadership.” Smith added: “I am deeply sorry, I love the game of cricket, I love kids wanting to play the great game of cricket that I love.

“Any time you think about making a questionable decision, think about affecting your parents.

“To see the way my old man has been, and my mum, it hurts. I just want to say I’m sorry for the pain I have brought to Australia and the fans and the public.”

Smith later broke down while saying, “I’ll do everything I can to make up for my mistake and the damage it has caused. If any good can come from this, if it can be a lesson to others, then I hope I can be a force for change.”

He added, “I know I will regret this for the rest of my life. I am absolutely gutted. I hope in time I can earn back respect and forgiveness. “I’ve been so privileged to represent my country and captain the Australian cricket team. Cricket is the greatest game in the world; it has been my life and I hope it can be again. I am sorry and I am absolutely devastated.”

Asked why he did it, Smith replied, “Good people make mistakes. I’ve made a big mistake by allowing this to happen. It was a huge error of judgement on my part.”

Smith admitted that the Aussie “leadership group” had devised a plan to tamper with the ball, and Cricket Australia’s investigation found Warner instructed Bancroft how to carry it out.

He also denied it had happened before, following suggestions similar tactics were employed in the recent Ashes series against England.

Related posts:
The Sachin Vs Virat Fallacy : An Analysis Of Why The Little Master Redefined The Economics Of India
[VoxSpace Life] The Magic Of MSD : The Reason Behind The Success Of Chennai Super Kings
[VoxSpace Life] Mahendra Singh Dhoni – The Ultimate Finisher

[VoxSpace Life] Sexual Abuse And Pedophilia : The Horrors Faced By The Boy Scouts Of America